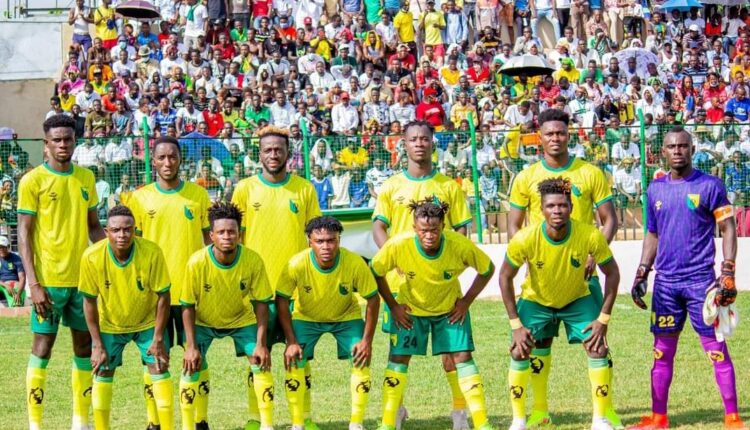 Chief Executive Officer [CEO] of Bibiani Gold Stars, Mr. John Kwasi Adu has lauded the performance of the playing body for their performance in the just-ended 2021/22 Ghana Premier League season.

The Bibiani-based side have maintained their status in the topflight despite their 2-2 draw against AshantiGold SC in the final game of the season at the DUN’s Park.

Gold Stars finished 10th on the league log with 46 points in their maiden campaign.

Speaking at a press conference in Bibiani, Mr. John Kwasi Adu said the aim was to remain in the league having gained promotion to the country’s top-flight last year.

“The vision we all looked up to for the past 22 years was to gain promotion into the premier league. This has broadened the smiles of our numerous supporters in the Bibiani township and beyond,” he said.

“It is for this reason that we went all out in our maiden season to adopt a campaign slogan ‘Lets’ Remain and Sustain in the Premier League”, he added.

According to him, the 2021/2022 Premier League season allowed the club to travel through seventeen premiership centers which had broadened the support base in the country.

Touting the club’s achievement in the first season in the GPL, Mr. Adu stated that its home venue, (‘Dun’s Park) had become historic for being the best performing home discovered in the 2021/2022 season which they hope to sustain in the coming seasons.

He gave a short-performing statistic on the 2021/2022 season

“With an impressive 13 home wins, one away win, three away draws, the club has 46 points and sits on the 10th position on the league table with one match to end the season”.

The CEO expressed gratitude to the entire Management Board, Head Coach, and technical team as well as the playing body for their massive work to stay in the premier league for the next season.

He also praised their sole sponsor ‘Asante Gold Corporation’ and father ” Mensin Gold Bibiani Limited for their massive commitment to the attainment of the club’s vision.