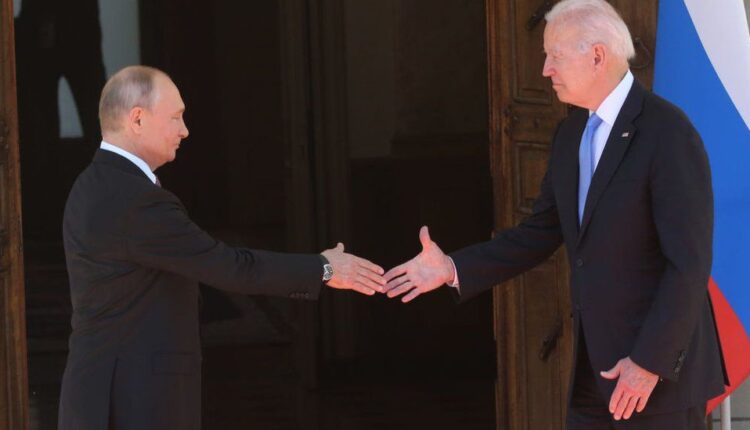 President Joe Biden has told President Vladimir Putin the US will take “any necessary action” to stop cyber-attacks from Russia, the White House says.

A reporter asked Mr Biden after the hour-long phone call if Russia would face consequences, and he said: “Yes.”

But Moscow denied US claims they had contacted the Russians repeatedly about the cyber-attacks in the past month.

It also comes amid an increase in attacks, including one that disabled 1,500 companies this month.

“I made it very clear to him that the United States expects when a ransomware operation is coming from his soil, even though it’s not sponsored by the state, we expect them to act if we give them enough information to act on who that is,” Mr Biden told media after the phone call.

When a journalist asked whether the US could attack the servers used by the hackers, the Democratic president said: “Yes.”

But after Friday’s call, the Kremlin said the US had not contacted Moscow about the cyber-attacks.

“Despite readiness from the Russian side to jointly clamp down on criminal activity in the informational sphere, over the past month no requests have been received from the relevant US departments,” said a statement from Mr Putin’s office.

The Kremlin statement added that both sides supported further co-operation on cyber-security, which Russia said “must be permanent, professional and non-politicised and should be conducted via special communication channels… and with respect to international law”.

A White House readout of the call states that both sides agreed to a deal that will see more humanitarian aid for Syria, signifying that the two leaders see opportunities for co-operation, despite tensions over cyberspace.

Ransomware attacks – where criminal syndicates hijack companies’ data and demand payment for its return – have exploded in recent years.

According to the US, many of the worst attackers come from Russia, and often operate with tacit knowledge, an even approval, from Russian security services.

Mr Biden said on Friday that the call came as part of a new, “more direct means of communication”.

The new connection, Mr Biden said, allows each side to “communicate to one another when each of us thinks something’s happening in the other country.

“It affects the home country. And so it went well. I’m optimistic.”

The message Mr Biden said he had delivered on Friday was similar to the message that he brought when the two leaders held their first face-to-face meeting last month in Switzerland.

Since then, the Russian or Eastern European based REvil hacking group unleashed a massive attack that caused outages across the globe.

The hacking placed increased pressure on Mr Biden to do something to counter the threats.

During Mr Biden’s meeting in Geneva last month, he provided the Russians with a list of 16 sectors that must not be attacked.