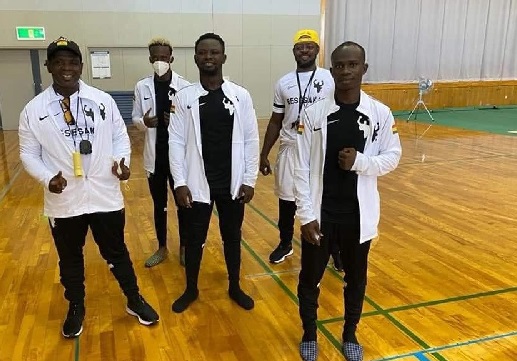 Black Bombers in high spirits ahead of Olympic Games

Amateur boxer, Samuel Takyi, has described Black Bombers’ final preparation in Inawashiro, Japan, as the best training camp which will prepare them adequately for the Olympic Games later this month.

Takyi and two other fighters – Sulemanu Tetteh and Shakul Samed – will represent Ghana at the multi-sport tournament in Tokyo from July 23 to August 8.

The Ghanaian amateur boxers started their preparations in Ghana before relocating to the city of Inawashiro for Team Ghana’s final preparation for the Olympics.

In an interview with the Graphic Sports from their Inawashiro base, Takyi said the Bombers were in high spirits ahead of the Games with a mission to make a name for themselves.

Takyi believed that the team had had the best of training camps, which could propel them to win laurels for the nation at the end of the Olympics.

“Training has been good for all of us and I think this is really going to help us,” Takyi said and added that “We are in high spirits to make ourselves and the nation proud at the Olympics.”

“We are getting used to the weather now and that is going to really help us when the tournament commences,” he said.

“The focus still remains the same for me and winning a medal is what I continue to dream about at the end of the competition,” Takyi revealed.