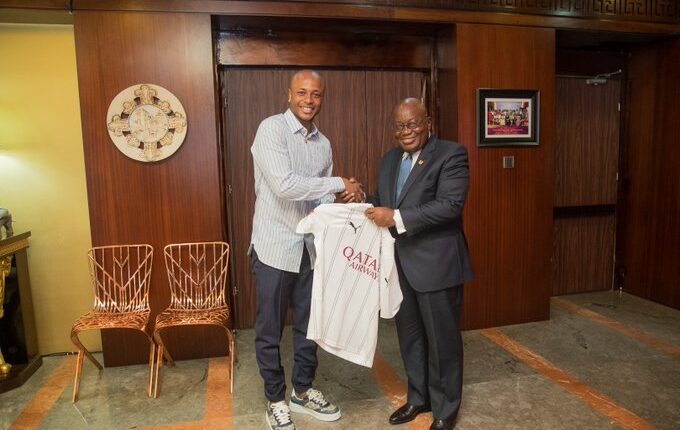 Ayew was received warmly by Akufo-Addo at the Jubilee House in Accra. The Ghana star was accompanied by spokesperson Fiifi Tackie.

After a fruitful conversation, Ayew presented Akufo-Addo with an Al Sadd jersey.

Meanwhile, Ayew has made a return to the Black Stars for the 2023 Africa Cup of Nations qualifiers in June.

Ayew is available after serving a suspension that kept him out of the final round of the 2022 World Cup qualifiers.

The attacker was given a two-match suspension after receiving a red card in Ghana’s final group stage match in the 2021 Africa Cup of Nations in January.

As a result, Ayew was unavailable for selection when Ghana beat Nigeria in the playoffs to secure qualification to the World Cup in Qatar.

However, he is expected to be in action in the two games against Madagascar and the Central African Republic in June.

Black Stars are expected to win both games and finish first in the qualifying group, which also includes Angola.

Black Stars face Madagascar in their first match of the 2023 AFCON qualifiers on June 1 at the Cape Coast Sports Stadium.

For the second match against the Central African Republic, Ghana will travel to Angola.

They will then compete in a four-nation tournament against Japan, Chile, and Tunisia as part of their preparations for the 2022 FIFA World Cup in November.