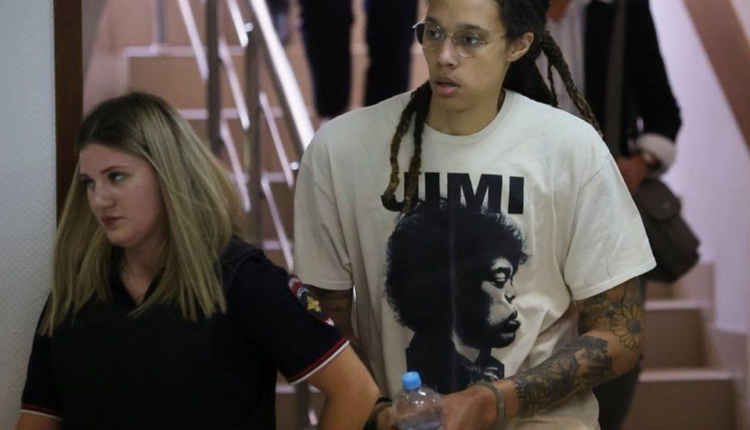 Ms Griner, a three-time WNBA league champion and seven-time All-Star, was seen arriving handcuffed at a court in the town of Khimki, outside Moscow.

If convicted, the 31-year-old faces up to 10 years in prison.

The US says she is being wrongfully held and should be freed. Russia denies that her detention is motivated by US-Russia tensions over the Ukraine war.

Russia invaded its south-western neighbour in February, triggering condemnation and economic sanctions from the US and its allies.

Players step up calls for Griner’s release from Russian prison
The troubling tale of a vanished basketball star
Ms Griner was detained on 17 February at a Moscow-area airport after cannabis oil was allegedly found in her luggage.

The maximum prison sentence applies to “large-scale transportation of drugs”.

However, even if acquitted at the trial, the government in Russia has the authority to overturn any decision and still send her to prison.

Ms Griner, affiliated to the Women’s National Basketball Association (WNBA), is considered one of the most dominant players in her sport’s history.

She travelled to Russia to play for EuroLeague team UMMC Ekaterinburg, where she had worked since 2014 during the US off-season. Roughly half of WNBA players compete overseas in the off-season.

For most, it’s a way to augment their domestic income, with WNBA players being paid roughly five times more in Russia than they do in the US.

Ms Griner’s arrest has gathered political support in her native US.

Last weekend, Secretary of State Anthony Blinken said in a televised interview: “I have got no higher priority than making sure that Americans who are being illegally detained in one way or another around the world come home.

“I can’t comment in any detail on what we’re doing, except to say this is an absolute priority.”