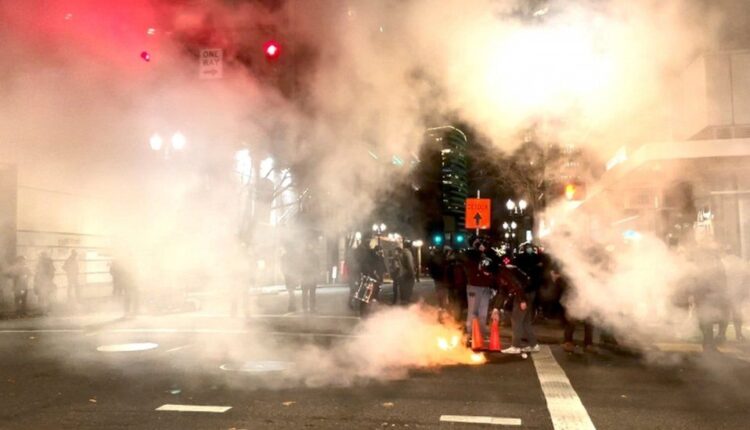 Calls for calm as teen gunman acquittal divides US

There have been calls for calm in the US after a teenager who shot dead two people during racial unrest last year was cleared of all charges.

Kyle Rittenhouse, 18, argued he was acting in self-defence when he shot the men and injured a third in Wisconsin.

The verdict on Friday, which followed a high-profile trial that divided the US, sparked protests in some cities.

But politicians, including President Joe Biden, and families of the victims have urged restraint.

“What we need right now is justice, not more violence,” lawyers for the family of Gaige Grosskreutz, who was shot and injured by Mr Rittenhouse, said in a statement.

“I urge everyone to express their views peacefully, consistent with the rule of law,” Mr Biden told reporters outside the White House.

Despite the calls for calm, a riot was declared by police in the city of Portland, Oregon, on Friday evening as some 200 people broke windows and threw objects.

There were also protests in Chicago and New York, but they were relatively low-key compared to the widespread civil unrest that the US had seen previously.

Mr Rittenhouse said he was acting in self-defence when he fatally shot Joseph Rosenbaum, 36, and Anthony Huber, 26, and injured Mr Grosskreutz, 28, in August 2020 in the city of Kenosha, Wisconsin.

The teenager and the men he shot are all white. The incident happened during violent protests over the shooting of a black man, Jacob Blake, by a white police officer.

Jacob Blake’s uncle was outside the court when Mr Rittenhouse was acquitted.

Justin Blake, the uncle of Jacob Blake, (R) listens to Hannah Gittings, (L) the girlfriend of Anthony Huber, speak after the jury returned a not guilty verdict

Mr Huber’s family said the verdict “sends the unacceptable message that armed civilians can show up in any town, incite violence, and then use the danger they have created to justify shooting people in the street.”

Mr Rittenhouse is now in an undisclosed location, a spokesman for his family told CBS.

“In this whole situation there are no winners, there are two people who lost their lives and that’s not lost on us at all,” they said.

The verdict has prompted strong reactions from both sides.

Derrick Johnson, the president of the civil rights organisation NAACP, tweeted that the verdict “is a reminder of the treacherous role that white supremacy and privilege play within our justice system”.

Prominent civil rights activist Reverend Al Sharpton said the “outrageous and dangerous” verdict will encourage vigilantes to use violence to assert their power.

“These continue to be dark days for black people killed at the hands of people that believe our lives do not matter,” he said in a statement.

There are also concerns about the legal precedence the verdict could set for future cases.

California’s Governor Gavin Newsom wrote: “America today: you can break the law, carry around weapons built for a military, shoot and kill people, and get away with it.”

President Joe Biden said he was “angry and concerned” at the verdict, but that “the jury has spoken”.

Conservatives argue Mr Rittenhouse asserted his right to bear arms and defended himself.

Former President Donald Trump congratulated him in a statement emailed to his supporters. “If that’s not self-defence, nothing is!” he wrote.

Several Republican lawmakers said they would like to offer a congressional internship to Mr Rittenhouse.

One of them was the representative of North Carolina, Madison Cawthorn, who on an Instagram story said: “You have a right to defend yourself, be armed, be dangerous and be moral.”

Following the verdict, right-wing Fox News host Tucker Carlson posted a clip of an exclusive interview with the teenager, to be broadcast on Monday.

“The jury reached the correct verdict – self-defence is not illegal,” Mr Rittenhouse says in a video which appears to have been filmed moments after the decision.

He also talks about the “scary” nightmares he has of “what could have happened” if he had been “seriously injured or hurt or dead”.

Liverpool star Salah reveals his main targets for the season