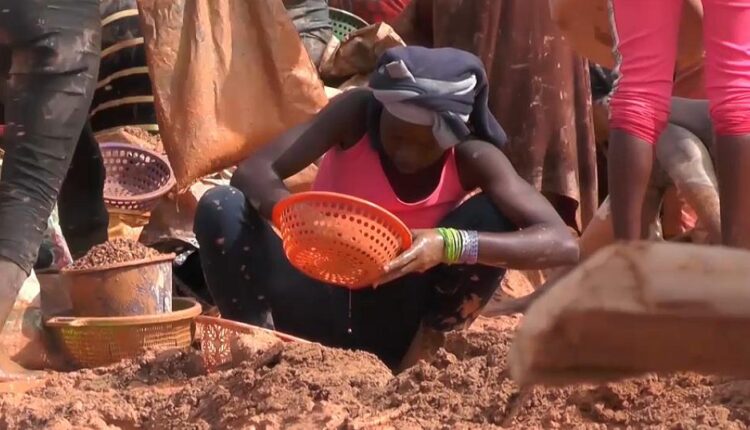 Sieves in hand, soaked for hours in water, in the hope of finding some gold nuggets. In this open-pit mine, the gesture has become commonplace for gold miners in the village of Kambélé 3, located more than 400 km from Yaoundé, Cameroon’s capital.

A crowd of vulnerable people, such as children and pregnant women, glean the gold residues that may have escaped from this mine operated by a Chinese firm. The activity here is dangerous, particularly for women.

Francois Mbembi has been digging gold for 14 years. He is very familiar with the risks here.

“As soon as the mercury enters the women’s bottoms. it causes damage. Indeed it scratches a woman’s body, and not only the women, we men too; and down there at the level of the woman’s sexual organs, it causes problems” Mbembi explained

Among the gold panners in Kambele 3, are many who have had what they call “the wound” on their private parts.

“Where the mercury exposure occurred here,, we began to itch when we work in the water sometimes; it hurts, even at home, down there it makes wounds, it makes itching and when you scratch it hurts. The others often go to the hospital. Recently, it was said that it had eaten away at a woman’s vagina and into her belly. She went to the hospital, and that was the next thing I heard” one of the female gold miners said.

At the Batouri Catholic Hospital, Dr. Bethsalel Ndifo is one of the regulars for patients with vaginal lesions. Over time, he says, he realized that most of these patients had worked in the mines and immediately made the connection to mercury, which is used here by almost all the large-scale miners to facilitate the separation of the gold from the tailings.

“If it is true that mercury can cause lesions when ingested through the skin and digestive tract, it is also true that if there is contact at the genital level, since the woman is immersed in water containing mercury during this work, it is understandable that the sex and reproductive system, especially the vagina, which are also exposed to this liquid containing mercury, can get damaged” Dr. Betsalel Ndifo (General practitioner, Catholic hospital complex of Batouri)

Since December 2018, Cameroon has been a signatory to the Minamata Convention on Mercury- a convention that commits states to reduce or even eliminate this product from the artisanal gold mining process. Yet in this mining town, the presence of the product is far from being eliminated.