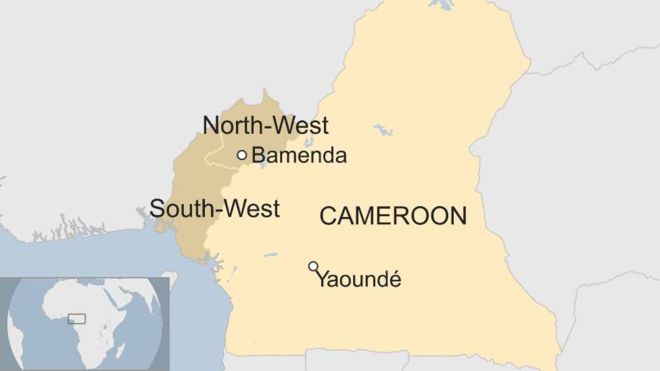 Dozens of people, mostly school pupils, have been kidnapped from a school in the west of Cameroon.

At least 78 students and three others, including the school principal, were abducted on Monday morning in Bamenda, the capital of the North-West region, a government official has told the BBC.

Cameroon’s North-West and South-West regions have been hit by a secessionist rebellion in recent years.

Militias, who have been demanding the independence of the two English-speaking regions, have called for a school boycott.

But no group has said it carried out the kidnapping at Bamenda’s Presbyterian Secondary School, which has pupils aged between 10 and 14.

‘Praying for the kidnapped’

The moderator of the Presbyterian Church in Cameroon, the Right Reverend Fonki Samuel Forba told the BBC that he had spoken to the kidnappers.

“They don’t want any ransom. All they want is for us to close the schools. We have promised to close down the schools,” he told the BBC.

“We hope and pray they release the kids and the teachers,” he added.

It is not the first time students have been abducted in the area, known to be a stronghold of separatist fighters, reports the BBC’s Ngala Killian Chimtom.

On 19 October, five students of the Atiela Bilingual High School were taken by unidentified gunmen. Their whereabouts are still unknown.

The separatists say that the Cameroon school system suppresses the English-speaking system that the North-West and South-West regions inherited from the British.

The militias, who want to create a new state of Ambazonia, began to emerge in 2017 after a security force crackdown on mass protests, led by lawyers and teachers, over the government’s alleged failure to give enough recognition to the English legal and education systems in the North-West and South-West.

The government was accused of relying heavily on people trained in the French legal and educational tradition to work in key posts and generally marginalising Cameroon’s English-speaking minority, who make up about 20% of the population.

President Paul Biya, who has been in power since 1982, was recently re-elected for a seventh term with more than 70% of the vote.

Opposition parties allege that the poll was rigged, but legal attempts to overturn the result failed.