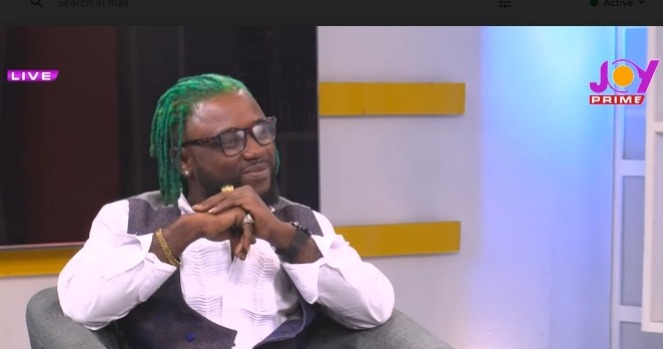 In an interview with Roselyn Felli on Prime Morning on Friday, he stated that having green hair has been his style since he started churning out music.

According to him, social media critics insinuated that he copied Camidoh’s style, but that is not the case.

“I was using this hairstyle way back, and it’s always been green. This is how everybody knows Kay 9ice. Camidoh also has green hair, but mine is different. I heard people talking about me copying Camidoh and all that, but that’s not true. I think Camidoh copied my hairstyle,” Kay 9ice claimed.

Despite all the criticisms by fans, Kay 9ice revealed that Camidoh is his best friend, adding that the “Sugarcane” hitmaker advises him sometimes.

Meanwhile, the “No Time” hitmaker is out with a new single titled “Fakye,” which according to him is inspired by the misunderstandings he had with his family during his childhood.

“The story is about my parents. They divorced a long time ago. I was still young when my dad came back to apologise to my mom. By then, I started hearing certain words that I did not understand as a child, but as time went on, I understood those words,” he narrated.

He further revealed that he is still not on good terms with his dad due to some situations he put his mother through. This, according to him, motivated him to produce “Fakye.”