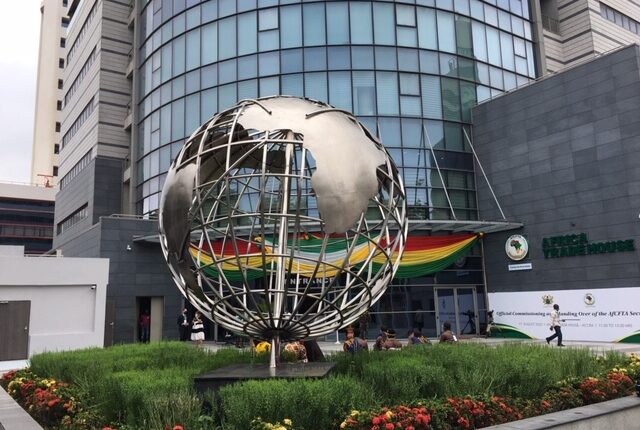 Can AfCFTA achieve the aim of African Unity?

The Organisation of African Unity, now African Union (AU), under Kwame Nkrumah’s leadership conceived an African Common Market programme. Nkrumah envisioned it to be an economic community of African countries pooling their production and trade to a common advantage. That, to Nkrumah, was the epitome of true independence.

The idea of a common African market howeve, remained a pipe-dream until 2012, when the 18th Ordinary Session of the Assembly of Heads of State and Government of the African Union adopted a decision to establish an African Continental Free Trade Area (AfCFTA) by 2017.

As AfCFTA awaits full implementation, the status quo remains. For example, four West African nations produce almost 70 percent of the world’s cocoa – Ivory Coast (42 percent), Ghana (18 percent), Nigeria (5 percent) and Cameroon (4 percent)   – but they only get about 2 percent of the US$100billion revenue per annum of the chocolate industry. Thus, while the cocoa commodity market commands about US$15-20billion revenue a year, the chocolate industry – which is a value addition in cocoa finished products – commands about US$100billion revenue a year.

In an attempt to address the problem, on March 28, 2018, both Ghana and Ivory Coast signed a treaty to defend their interest in cocoa production, and to a large extent determine cocoa prices on the world market.

According to the United Nations Economic Commission for Africa (UNECA), intra-African trade is only 15 percent while Asia and Europe are doing remarkably well with an estimate of 61 percent and 67 percent respectively. What this means is that Africa is woefully dependent on Asia, Europe and America for the trade and development of its raw materials. Essentially, this is how Africa becomes exploited and underdeveloped despite all its vast natural resources and raw materials.

Hopes are that AfCFTA will, as envisioned by the founding fathers of AU, dismantle colonial borders that hinder genuine trade among African countries. But how does AfCFTA resolve the major challenge of political instability – a serious malaise harmful to economic growth and social development?

AfCFTA is not just a ‘Free Trade Agreement’ – it is more than that. It is about establishing a unified continental market, including the free movement of labour and investments. The numerous benefits of AfCFTA include, first of all, the essential protocol on the Free Movement of people.

This matters because, at present, travelling between African countries can be very challenging for Africans. Despite the eminent effort of the East Africa and West Africa sub-regions that introduced regional passports to aid the movement of people across each regional bloc, there are some obstacles such as visas, expensive air tickets, Customs clearances and border controls which make it difficult to do business across borders.

In addition, African countries are not able to leverage on each other’s extensive human resources. Africa will in the next few decades be the most youthful and populace continent; yet despite shortages of labour in some African countries, trained and skilled Africans find it difficult to work in other African countries. Where some have moved to neighboring countries in search of employment, it has caused tensions in some countries – a good example is South Africa. This is because uneven development among African countries brings about movement of people that results in crowding of the more developed countries and brain-drain in the less developed.

The second-most essential benefit of AfCFTA is that all 55 countries on the continent have a collective GDP of US$2.5trillion – making it the 8th-largest economy in the world just behind India. And this also makes the continent much more attractive to investment, from both within and outside the continent. That notwithstanding, there are other factors which hinder investment in Africa – such as conflict and political instability, inadequate infrastructure, lack of energy: and, more crucially, almost all African countries rely on extractive industries or exporting primary commodities… which do not create large-scale employment.

On the other hand, by encouraging the development of AfCFTA it will hold back these factors which hinder investments on the continent. For instance, the Grand Inga Dam is a proposed hydroelectric dam on the Congo River in the Democratic Republic of Congo. Upon completion, the dam will be capable of generating 25 million kilowatts of electricity – capable of electrifying the entire African continent. Moreover, it is estimated to be twice the output from the largest energy-generating body ever built: the Three Gorges Dam.

If AfCFTA is fully implemented, the free movement of goods across borders will boost investments on the continent; particularly Small and Medium Enterprises (SMEs). This will also encourage business people to make investments necessary to sustain economic growth and create job opportunities the continent badly needs for its people – regardless of nationality.

Finally, the AfCFTA will increase trade between African countries. According to United Nations Economic Commission for Africa (UNECA), less than one fifth of all exports are currently from one African country to another. Take Kenya for instance, the largest economy in the East African Community: each year the country exports US$1billion worth of products to Europe and around US$500million to the US. Kenya’s total export amounted to US$6billion in 2017. But to its neighbour, Ethiopia, Kenya exported just US$69 million in 2017. Why? The main reason is the high level of trade taxes.

To address this, the AfCFTA is proposing to remove trade taxes on at least 90 percent of all trade between African countries to boost regional trade by nearly US$1billion and create abundant jobs across the continent. And AfCFTA is designed to address many countries’ multiple and overlapping memberships in Regional Economic Communities (RECs), which are complicating integration efforts. Kenya, for example, belongs to five RECs – and this does not help achieve the continental goal of a free trade area and allowing people movement across the continent, all sort of restrictions creating challenges to the goal of continental unity.

With all these promising features AfCFTA is offering, for it to be successful Africans must wake up and smell the coffee. For example, the first and second-largest economies in Africa are Nigeria and South Africa respectively.

However, during recent years we have witnessed these two nations being at the centre of xenophobic attacks. In recent times in Ghana, retailers from Nigeria have been restrained and attacked by Ghanaian traders for engaging in retail businesses – which they insist violates the Ghana Investment Promotion Centre Act 2013 (Act 865). This is one of the biggest challenges that awaits AfCFTA – although when it is endorsed as municipal law and the programme is implemented effectively, it will hopefully remove the bureaucratic and legal hurdles hindering the free movement of people for business. And potentially, Africans will be able to use their talents where there is a demand for them on the continent.

And whereas free movement of people and free trade is in principle a good thing, the reality – as Europeans are fast discovering – is the opposite without political stability. Current European political upheavals, occasioned by the Russia-Ukraine War, should act as a warning to Africa. For implementing the idea of a ‘free trade area’ without the accompanying checks and balances designed to minimise inequality will only lead to political difficulties in the future.

The better solution is, I think, for African governments to first apply their best endeavours to deliver good governance; as delivering good governance will by implication reduce inequality on the ground, thus levelling the playing field with regard to equitable distribution of the national cake.

For example, while countries are admirably recovering from the effects of COVID-19 and putting in place sustainable economic measures and responsive structures to rebuild their economies, the government of the day in Ghana keeps patting itself on the back for an evidently mismanaged and debt-choked economy that has escalated the growing levels of inequality. Even though we must acknowledge some intentions of government in efforts aimed at revitalising the economy, these intentions – with the past serving as a guide – may remain a paper-tiger.

The efficiency in managing machinery of state does not lie in using a large force of ministers, some of whom have poorly-defined job descriptions.  We should however acknowledge the marginal decline in size of government as the result of a reduction in the number of ministers. This will surely save some money for the state to be used in productive sectors of the economy.

It is only by delivering good governance, the rule of law and democracy that will it be possible to minimise inequality in Africa: free trade and economic development to strengthen a united Africa will follow naturally, in the same way liquids find their level when allowed to run freely. Anything less than this, given comparatively weak institutions to protect the fundamentals of democracy, AfCFTA risks of becoming yet another Structural Adjustment Programme – but on a larger scale.

Finally, I want to believe that Africa will become a beacon of democracy and good governance by recalling the lessons from our history. We should stand by our conscience and speak-up about the wrongs in our society, and thus ensure good governance and socioeconomic development. It is only through this that Africa can be a better society, united for all of us and subsequent generations.

>>>The author is a Professional Law Student. He can be reached on marcusgarvey.snr@gmail.com