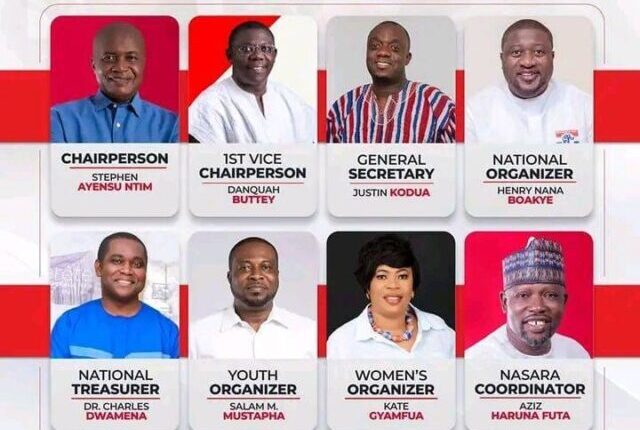 Can new NPP executives ‘Break the 8’?

“The battle is the Lord’s”, “Edey bee k3k3, “Forward ever, backwards never”, “Arise for change”, “Positive Change”, Yeresesa mu”, “JM toaso”, “4more4Nana” and “Round 2” are a few of the many slogans by some political parties that dominated the airwaves in the past.

However, Today’s slogan, synonymous with the governing party is “Breaking the 8” which Indeed, some believe may be a tough nut to crack to win a third consecutive term for the NPP to govern for another term.

The dust has settled on the elections of the party executives with the next focus on the flagbearer in their bid to make history in 2024. But some political analysts have been on the stands that the new leaders have a huge responsibility to ensure victory for the party in the next national elections to break a long-standing jinx in the Fourth Republic of Ghana, with no political party ever enjoying power beyond two terms.

Though the “old guards” are making way for the new, a big question remains on the lips of political enthusiasts, including some members of the NPP: “Can the new leadership break the eight-year cycle for the elephant party”?

While the NPP is optimistic about “Breaking the 8” on the back of some successes, the largest opposition party, NDC, is lacing its boots to capitalise on what has been described as lapses in the last eight years to boost their electoral fortunes.

It might not be a fresh page for the NDC, but the NPP will be the focus under scrutiny by Ghanaians to account for their mandate in the last eight years.

Fact remains however that after eight years in power, citizens would usually become tired of any monotony and would demand change if the state of affairs is not better.

They would have seen it all and can easily pick a red pen to mark promises in manifestos of incumbents.

The current NPP government can score a plus in Free SHS, One-District-One-Factory (1D1F), several social interventions and other feats, but they may not escape an economic nosedive that has reluctantly pushed the government for an economic bailout from the International Monetary Fund (IMF) after chastising such actions taken by their predecessors.

So, what are the strengths and weaknesses of the newly elected generals of the NPP that could make or break their fortunes in December 2024?

Mr. Stephen Ntim, who had been chasing his dream of becoming the NPP’s National Chairman since 2005 but was unsuccessful on four consecutive occasions, finally broke the deadlock.

He has proven in the past that he is capable of helping the NPP win parliamentary seats.

In 2004, as the 1st Vice Chairman of the NPP, Mr Ntim personally worked hard to help the NPP increase its parliamentary seats from 100 to 128.
He led the vetting committee during the parliamentary primaries and, through tact and diplomacy, resolved feuds that could have caused grievances leading to loss of seats.

Again, when Mr Ntim was made the chairman of the Settler Communities Project of the 2016 electioneering campaign, he executed his role well, which resulted in the NPP increasing its parliamentary seats significantly and winning additional seats the party had never won before.
As an NPP veteran and having served the party in various capacities, his rich experience can help drive the NPP agenda of retaining power in 2024.

That notwithstanding, there are a few traits that could cause the downfall of the new chairman.

Mr Ntim must be more humble, bearing in mind that he does not know it all. In the interest of his party, he must endeavour to build consensus and encourage more dialogue.

It will not come easy as a leader, but if Mr Ntim thinks of Ghana first and works to build a nation of truth and integrity, as well as harnesses the time, talent and treasure from all, he will be a successful party chairman.

Many people had doubted and questioned the capabilities of the NPP’s newly elected General Secretary, maintaining that Justin Frimpong Kodua (JFK) was too gentle and subtle to be able to flaw someone like the NDC’s General Secretary, Johnson Asiedu Nketia, who has been a rock for the NDC over the years.

Other party members also believed that a more experienced and versatile politician like John Boadu should have been maintained as General Secretary to prevent an entirely new executive since he was instrumental in the party’s victory in 2016 and 2020.

He combined his role as General Secretary with the Director of Operations and Logistics for the 2016 and 2020 general elections.
Indeed, senior leaders of the party, including the former Speaker of Parliament Professor Aaron Mike Oquaye, former CEO of the Bui Power Authority and ex-Vice Chairman of the NPP Mr Fred Oware and the immediate past National Chairman of the NPP Freddie Blay threw their weight behind Mr Boadu.

Additionally, Mr Boadu had the support of 15 out of 16 regional chairpersons of the party.

However, JFK managed to defeat Mr Boadu, which implies that he could match up to any opposition as General Secretary.

As a lawyer who makes money through verbal arguments, he is likely to be solid in any political battle.

What people may not know is that JFK is a grass root person.

Together with other team members, he restructured and made attractive all Ashanti Regional branches of the Tertiary Students Confederacy (TESCON) of the NPP.

He rose to become the Youth Organizer of the party in the Ashanti Region. He was instrumental in mobilising the grassroots for the NPP’s victory in the 2016 general elections. He served as the chairman of the Legal Committee of the National Youth Wing. During this period, he ensured the promulgation of the constitution of TESCON.

JKF is on a mission of building internal party structures, revitalising the party’s communications mechanism, placing the welfare of the grassroots at the heart of party operations, digitalisation of salient activities and ultimately remodelling the party into an election-winning machine.

If he can accomplish this mission, it will contribute to “Breaking the 8” efforts.

However, the fact that huge party members supported Mr Boadu could cause problems for him, which the NDC will happily welcome.

He must build bridges and win Mr Boadu to his side to communicate unity.

More importantly, he must acquire every arsenal to match up with the hungry lions of the NDC, who are ready to pounce on the NPP with every failure of the NPP in the last eight years.

How this is managed will determine his fate and that of his party on judgement day, two years from now.

Henry Nana Boakye (Nana B) happens to be one of the household names in Ghanaian politics. Despite his young age, he has chalked some success in the political arena through his vibrancy and youthful exuberance, which enabled him to win the National Organizer position.

Nana B took over from Sammi Awuku as the NPP’s Youth Organizer and performed creditably in office.

Members of the NPP describe him as a mobiliser, fundraiser, strategist, presidential lawyer, and all-rounder.

Under his watch as the Youth Organizer, he mobilised the party’s Tertiary Students Confederacy (TESCON), which played an instrumental role in NPP’s victory in the 2020 elections.

During the tenure of Henry Nana Boakye as the National Youth Organizer, a masterclass was held for all TESCON executives in all the regions, which speaks volumes of his kind of leadership.

But the 2024 election will be a battle he has not witnessed before due to the high stakes, and he cannot rest on his oars.

“Breaking the 8” requires the readiness and commitment of all classes of the NPP, especially the youth, and Nana B must prove his worth.

From his days of seeking to be an SRC President at KNUST and all contests he has been involved in, he must understand the value of humility and the importance of reaching out to everyone if the NPP is to make strides in 2024.

Mobilising resources and connecting everyone to buy into the party’s vision would rest on his shoulders.

He cannot entertain lapses if the NPP is to set a record in 2024.