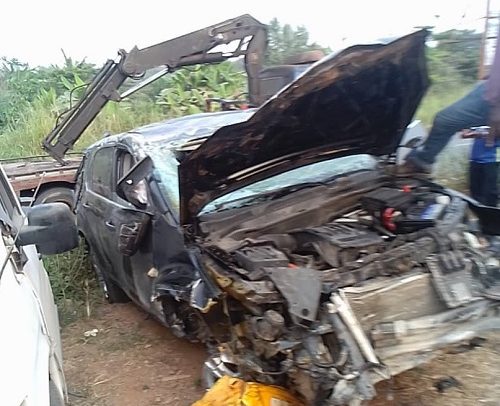 A second-year Optometry student of the Kwame Nkrumah University of Science and Technology (KNUST) in Kumasi has been killed by a speeding vehicle.

Emmanuelle Afia Ayetey, 26, was standing by the roadside with four other people at Ayeduase, near KNUST, when the vehicle hit a gutter pillar, somersaulted and hit them on Friday.

Unfortunately, Afia Ayetey could not survive as she died instantly, whilst the four other people also sustained severe body injuries and were rushed to the hospital for treatment.

The injured persons, who have since been hospitalised, have been identified as Doreen Amponsah, 28, Vida Afrah, 35, Gerrard Osei Tutu, 16, Tracy Ohemeng Asamoah, 9.

A police report said the driver of the car, John Kofi Gyimah, 68, and another occupant in the vehicle, Samuel Gartey, 67, also sustained injuries and they have been hospitalised.

“On 04/02/2022 at about 4:30pm, suspect driver, John Kofi Gyimah, 68, in charge of Chevrolet Equinox St Wagon vehicle with registration number AS 6241-22, with one occupant, Samuel Gartey, 67, on board, driving  from Madam Catherine Clinic junction towards  Ayeduase.

“On reaching Charles Oti Boateng road in front of Ayeduase Apostolic Church, the driver lost control of his vehicle and hit a gutter pillar and the vehicle somersaulted and knocked down five persons,” the police report indicated.

The police report, sighted by the paper, said four people survived the accident but Afia Ayetey died on the spot, adding that the accident car has been impounded as investigations continue.