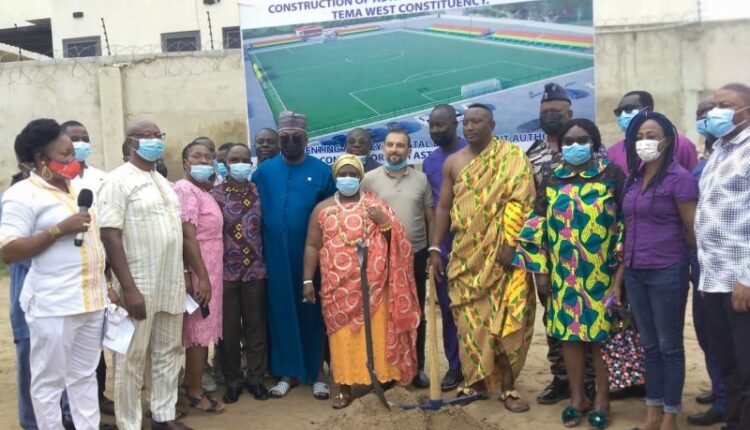 Mr. Carlos Kingsley Ahenkorah, Member of Parliament (MP) for the Tema West Constituency, has cut sod for the construction of an ultra-modern Astroturf for the Baatsona Community in the Tema West Municipality.

The Astroturf, with the Coastal Development Authority as an implementing agency, after its completion would pave way for sporting activities and event area for the Baatsona Community; around Spintex and its environs.
The project, awarded to the MSH Astros Ghana Limited, would cost GHC2,000,000.00 and is scheduled to be completed in six months.
The construction area, which is an existing football park, located within the Baatsona TMA Primary School, has over the years witnessed the rise of many footballers, many of whom play in the Ghana Premier League and national terms.
Mr. Ahenkorah, who performed the official ground-breaking said, the project was the third in a series being championed; with first at the Mexico Park in Community Two, the second at Sakumono Village and the current one at Baatsona.

“It is my vision that before the end of 2024, I would have completed five of such projects in the Constituency with Dzatabu in Community Three and Adjei Kojo also benefiting,” he said.
He said sports, particularly football, played a vital role in youth development, and expressed optimism that the project, would enhance the development of football talents in the constituency and the country as a whole.
He said sports had been one of his cardinal preoccupations to ensure that the youth are presented with opportunities to have such facilities, emphasizing that the development of sports was a remarkable aspect of shaping society positively.
Mr. Ahenkorah noted that even though parts of the land had been encroached, the remaining land would be adequately maximized to ensure that the project came to fruition, and called on the contractor to ensure that the project was completed on schedule.
Alhaji Salifu Sinkare, Chief Executive Officer of MSH Astros Ghana Limited, said the project would have as its component; an artificial turf, floodlight, dressing and changing room, fencing, and a sitting area with a sitting capacity of 1,000 spectators.
He called for support from the youth of the community to ensure that the facility was completed according to the timelines allotted, and said, the construction of drains within the pitch would be factored into the project to ensure the free floor of rainwater to prevent flooding on the pitch.
Present at the sod-cutting ceremony were; Mrs. Adwoa Amoako, Municipal Chief Executive, Tema West Municipal Assembly; Mr. Isaac MacCarthy-Mensah, Tema West Municipal Director of Education among other dignitaries.