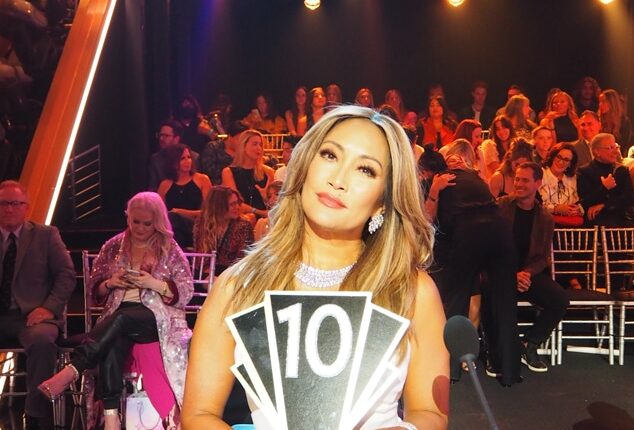 Carrie Ann Inaba’s Dancing With The Stars Premiere Night Look Deserves A 10: All The Glam Details

Carrie Ann Inaba’s ensemble for the premiere night of Dancing with the Stars?

Tens across the board.

In case you haven’t waltzed your way over to Disney+ yet, season 31 of the competition show debuted with a bang on Sept. 19. And for the season’s first episode, the legendary judge decided to incorporate the symbolism of a “new beginning” when it came to her stunning glam. (Her look included an all-white full-length gown, complete with a plunging neckline).

“We have begun a new chapter with Disney+ and it has been so exciting, so I chose my whole look based on the idea of a fresh start,” she exclusively told E! News.

“I also chose an ‘old Hollywood,’ glamorous style because everything that is old is new again. It has been such an honor to be on this panel for 31 seasons and to have this opportunity to start again with Disney+ is a great way to celebrate this amazing show.”

Carrie’s entire look was made complete by her gorgeous hair and effortless makeup. As hairstylist Glenn Nutley  revealed, the duo went with a “classic” look since her hair was recently “cut into a long bob.”

“I created some custom clip in pieces to recreate her signature look,” Glenn shared. “The underneath of her natural hair was braided up to hide the true length and the roots were tapped with Bumble and Bumble Pret-a-Powder for added grip. To give the hair some extra texture and color I added individual keratin bond extensions to the clip ins. The look was finished with Oribe’s Dry Texture Spray and Superfine Hair Spray.”

As far as the glam goes, makeup artist Marylin Lee Spiegel  noted they decided to go in a seasonal direction for her look. “We went for a fresh end of summer vibe to kick off season 31,” Marylin said. “To warm and flush her complexion, I used Nude Envie cream cheek color in Peachy and cream bronzer in Stellar,” adding that her “lashes by House of Lashes in Stella Luxe” helped enhance her eyes.

“On her body, I mixed Vita Liberata body bronzer and Lorac Tantalizer in Champagne Bronze,” Marylin continued. “And buffed the combo on her skin with Iconic London Pro Puff blending brush.”

But what about the gown itself? Well, as stylist  Rhonda Spies  explained, Carrie being able to sparkle her way back into her judge’s seat was a must.

Noting that the 54-year-old wore a stunning white Ines Di Santo gown, accompanied with diamonds from Dena Kemp and XIV Karats, Rhonda told E! News that simply put, “more is more and less is a bore when it comes to Dancing With the Stars.”Although Carrie has sat in the judge’s seat for the show’s entirety, as she explained, there’s always something different about each and every season—especially this one.

“I have to say, it almost felt like season one again and having 16 contestants to start off with was nonstop entertainment,” she said, referring a lineup which includes stars Wayne Brady, Jordin Sparks and Shangela to name a few.

“I am really looking forward to hearing what the fans thought of the show, I hope they had as much fun at home as we did in the ballroom.”One note about this season that Carrie thinks deserves a perfect score? The matter of inclusion within the cast.”As an Asian-American woman, and a dancer who has disabilities and auto-immune disorders, it was powerful to see the incredible inclusiveness that this season offered all of us,” she shared.

“I thik for people watching to have the ability to see themselves in the competitors is a gift that has benefits that maybe we can never really understand. As somebody who has lived that life and walked in their shoes, I appreciate what that feels like, and I think it is something to be celebrated.