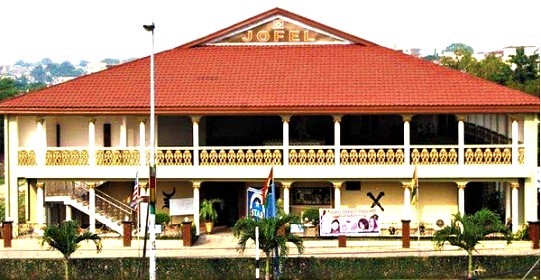 A few months ago, I received a phone call from a good friend of mine who was also a school mate and with whom I served as executive members of the Akatakyie fraternity for six years – he as president and I as secretary.

Jerry needed a favour. His mother would be celebrating her 70th birthday later in the year and wanted to mark the occasion with her memoirs, for which she needed some support and direction, and he felt I could play a role in that.

I had met Auntie Felicia a few times at Jofel Restaurant near the Airport Roundabout in Kumasi. She owns and runs the establishment providing on-site and off-site catering services, among others.

I was delighted to help, and after a few telephone chats, Auntie Felicia and I met at her office to discuss the outline and other related matters relating to the book she had planned.

Over the next three months, we developed a warm, fruitful and rewarding working relationship in spite of our respective work schedules. Her personal assistant, Luciana, played a pivotal role in the whole enterprise.

Eventually, after a few hair-raising moments in the final week, printing and delivery of A Rose Among Thorns, which I had been coordinating, was secured, with just a few hours to the D-Day. We all heaved a collective sigh of relief.

Last Saturday was her 70th birthday and all roads led to the Greenwood Event Centre at Asokwa, Kumasi for glittering, black-tie bash, with the smooth, urbane ‘Chairman-General’, Kwame Sefa-Kayi, as MC, and a vast array of political and business personalities, as well as figures from royalty, banking and academia.

I could not have missed it for all the gold bars in the Bank of England’s vault or for all the tea in China.

Essentially, the evening was not just about Auntie Felicia’s birthday or her book launch. It was a celebration of a trilogy of 70 years of life, 50 years of her marriage to Lt. Gen. J. B. Danquah, Chief of Defence Staff from 2005-2009, and 40 years of Jofel’s existence.

The company’s name is derived from the first names of the couple: Joseph and Felicia.

On Sunday, a thanksgiving service was followed by lunch at Jofel. The book sales on both days were brisk. I was delighted and grateful I had played a role in bringing it to fruition.

A Rose Among Thorns essentially captures Mrs Danquah’s life story, including her family background, her youthful days, family and children, business and her Christian life.

It also discusses parenting styles, as well as some management values she holds dear. A couple of delightful recipes are thrown in at the end for good measure.

In all of this, what I found most compelling as we discussed her life in preparation for the book was her entrepreneurial spirit and her tenacity in starting and sustaining Jofel over four decades to bring it to its iconic point today on the Kumasi hospitality landscape.

There is another outlet at Anyinam. Among all of the fascinating stories and accounts she gave, it was the Jofel story that I believe stands tall.

All too often, it is easy to assume that successful entrepreneurs, or indeed leaders in other disciplines, attained their stations overnight.

Too often, we see the blooming roses of their successes but are blissfully unaware of the thorns that lay strewn on their paths as they made their journey through uncertainties, loneliness and in many cases, setbacks.

Auntie Felicia cites several of such instances, including witnessing helplessly the bulldozing of her establishment by soldiers during the Provisional National Defence Council (PNDC) era as she held her little baby in her arms. Her husband was out of the country on assignment.

Unfortunately, many businesses fold up or fail to grow significantly over a period of time. No surprises there.

It is really tough, and many give up after a few setbacks and run into the comforting arms of a salaried job, as Auntie Felicia, a trained teacher, could possibly have done.

To keep pushing for 40 years and remain a market leader in an industry that can be notoriously fickle, especially when new players come to town, is indeed commendable.

It is an oft-repeated mantra that the private sector is the engine of growth in every economy, something that adherents of the New Patriotic Party (NPP) have preached over the years.

I can understand the thinking behind the saying and have on occasions joined the chorus.

However, after some prodding and reflection, I am minded to accept, and then insist that in reality, the public sector is indeed the engine of growth.

I agree, because if for instance a tax regime or its processes are unduly repressive, or it is hell for a business person to obtain relevant documents or permits from the State, they stifle business growth. Bad roads, erratic power supply and an unreliable justice delivery system are all enemies of business and these lie with the State.

Prof. H. Kwasi Prempeh of the CDD shares in this view, urging that we should ‘drop the cliché of the private sector being the engine of growth and place the public sector in the driving seat’.

If there ever is anything like a Ghanaian business ‘curse’, it is the inability of many businesses to survive beyond their founders, for several reasons.

Too often, they are run as one-man businesses with no clear succession plan, and the children or other family members who inherit these businesses tend to have little experience or interest in the business and just run it down.

Global giants such as Ford, Mercedes Benz, KFC, Marks and Spencer and Boots, among others, were established many years ago as small businesses.

Today they have outgrown their founders in longevity, size and stature because of systems and structures put in place back then. Generational thinking is key.

From what I have learned about the Jofel structure and systems in the past few months, including the hands-on involvement in its day-to-day management by key family members, it appears to me that it will remain a force to reckon with on the hospitality landscape in Kumasi and beyond for many years to come.

I must remember to lift another glass and toast to many happy returns for Jofel. Cheers!!