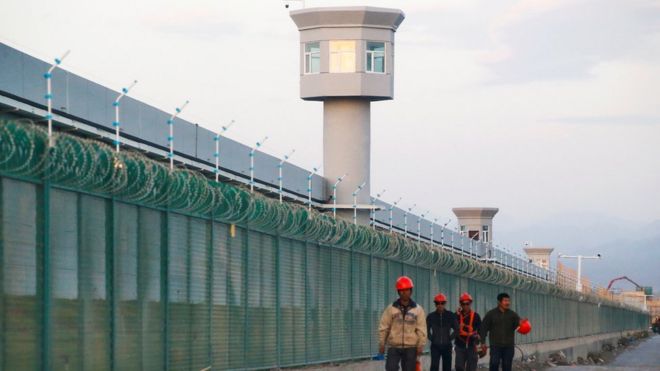 China has expanded its network of detention centres for its Uighur minority despite insisting the “re-education” system was being scaled back, a new report says.

The Australian Strategic Policy Institute says there are 380 suspected facilities in the Xinjiang region – some 40% more than previous estimates.

China says its aim is to tackle poverty and religious extremism in Xinjiang.

But the US has likened the centres to concentration camps.

Rights groups say at least a million people have been incarcerated in the system.

What does the report say?

The report identifies 100 more detention sites than previous investigations have shown, based on analysis of satellite imagery, interviews with eyewitnesses, media reports and official documents.

More than 60 detention sites were worked upon between July 2019 and July 2020, while 14 camps are still under construction, the report said.

Around half of the new centres are higher security facilities, which could suggest a shift towards prison-style facilities, report author Nathan Ruser said.

“The findings of this research contradict Chinese officials’ claims that all ‘trainees’ from so-called vocational training centres had ‘graduated’ by late 2019,” he said.

“Instead, available evidence suggests that many extrajudicial detainees in Xinjiang’s vast “re-education” network are now being formally charged and locked up in higher security facilities, including newly built or expanded prisons, or sent to walled factory compounds for coerced labour assignments.”

However around 70 camps have seen the removal of fencing and perimeter walls, the report added.

Chinese state-controlled newspaper Global Times has since reported that ASPI contributors Clive Hamilton and Alex Joske have been banned from entering the country.

Beijing has faced international condemnation for its network of detention centres which mostly house Muslim minorities.

The US has placed sanctions on Chinese politicians allegedly involved and earlier this month blocked some exports it said had been made with “forced labour”.