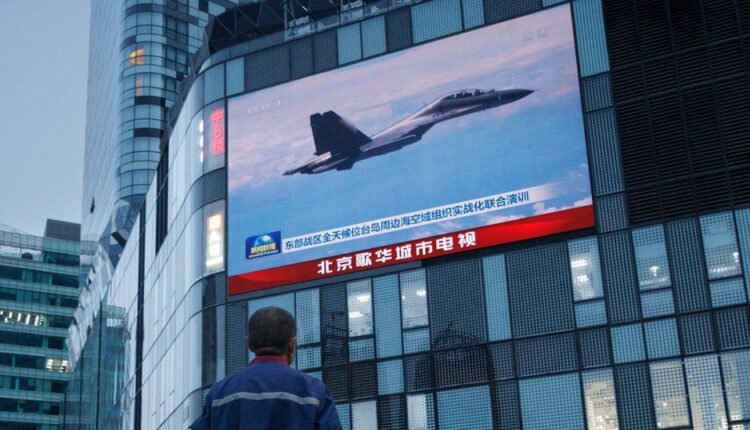 China is gearing up for military exercises in the seas around Taiwan following top US politician Nancy Pelosi’s trip to the island.

Ms Pelosi left on Wednesday after a brief but controversial visit to Taiwan, which China regards as a breakaway province.

In response, China announced five days of “necessary and just” military drills, which will begin on Thursday.

On Wednesday, Taiwan’s defence ministry said it had scrambled jets to warn them off.

The ministry later added that unidentified aircraft, probably drones, had flown over the outlying Kinmen islands, Reuters reported. It said the military fired flares to drive away the aircraft and stayed on alert.

China has said the exercises will take place in some of the world’s busiest waterways and will include “long-range live ammunition shooting”.

In an effort to calm matters, the foreign ministers of the G7 nations – Canada, France, Germany, Italy, Japan, the UK and US – released a joint statement saying China’s escalation risked destabilising the region.

“There is no justification to use a visit as pretext for aggressive military activity in the Taiwan Strait. It is normal and routine for legislators from our countries to travel internationally,” the statement said.

Ms Pelosi, the most senior US politician to visit Taiwan in 25 years, made the trip as part of a wider Asian tour. China had warned her not to travel to the island.

Accusing the US of “violating China’s sovereignty under the guise of so-called democracy”, Chinese Foreign Minister Wang Yi said: “Those who play with fire will not come to a good end and those who offend China will be punished.”

In a statement after the visit, Ms Pelosi said China cannot “prevent world leaders or anyone from travelling to Taiwan to pay respect to its flourishing democracy, to highlight its many successes and to reaffirm our commitment to continued collaboration”.

After leaving Taiwan, Ms Pelosi travelled to South Korea, where she is due to meet the speaker of the National Assembly, Kim Jin-pyo.

They are expected to discuss regional security, economic co-operation and climate change.

The senior US Democrat’s visit was not approved by her party colleague, President Joe Biden, who had said the American military felt it was “not a good idea right now” amid heightened tensions between the two countries.

The US walks a diplomatic tightrope with its Taiwan policy. On the one hand, it abides by the “One China” policy, which recognises only one Chinese government, giving it formal ties with Beijing and not Taiwan.

On the other, it maintains a “robust unofficial” relationship with the island, which includes selling weapons for Taiwan to defend itself.