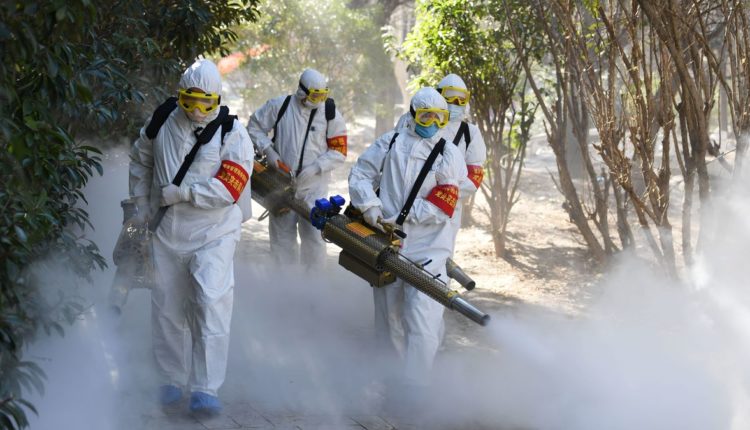 The lockdown in Wuhan, the Chinese city where the global coronavirus outbreak began, will be partially lifted on 8 April, officials say.

Travel restrictions in the rest of Hubei province, where Wuhan is located, will be lifted from midnight on Tuesday – for residents who are healthy.

A single new case of the virus was reported in Wuhan on Tuesday following almost a week of no new cases.

Countries around the world have gone into lockdown or imposed severe curbs.

The UK is getting to grips with sweeping new measures to tackle the spread of coronavirus, including a ban on public gatherings of more than two people and the immediate closure of shops selling non-essential goods.

Meanwhile, health experts say Americans must limit their social interactions or the number of infections will overwhelm the health care system there.

Spanish soldiers helping to fight the coronavirus pandemic have found elderly patients in retirement homes abandoned and, in some cases, dead in their beds, the defence ministry has said.

An ice rink in Madrid is to be used as a temporary mortuary for Covid-19 victims.

The World Health Organization (WHO) has warned that the pandemic is accelerating, with more than 300,000 cases now confirmed. It is urging countries to adopt rigorous testing and contact-tracing strategies.

Wuhan has been shut off from the rest of the world since the middle of January. But officials now say anyone who has a “green” code on a widely used smartphone health app will be allowed to leave the city from 8 April.

Earlier, the authorities reported a new case of coronavirus in Wuhan, ending a five-day run of no new cases in the city.

It comes after health officials there confirmed that they were not counting cases of people who were positive but had not been admitted to hospital or did not show any symptoms of the disease.

Official government figures say there have been 78 new cases reported on the Chinese mainland in the last 24 hours. All but four of them were caused by infected travellers arriving from abroad.

This so-called “second wave” of imported infections is also affecting countries like South Korea and Singapore, which had been successful in stopping the spread of disease in recent weeks.

South Korea has been seeing a drop in its daily tally of new cases. On Tuesday it reported its lowest number since 29 February.