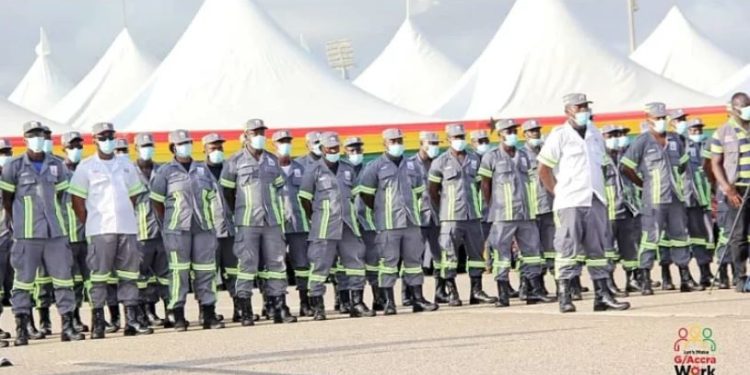 There’s no doubt about the good intentions of the Greater Accra Regional Minister, Henry Quartey, to make Ghana’s capital, one of the cleanest cities in Africa.

Unfortunately, he can’t be everywhere at the same time. He’s not the Holy Spirit. Henry Quartey has so far made some significant impact with his physical presence at places he’s visited within the city to whip traders and stubborn motorists in line.

Where he’s about to fail is his lack of appreciation of what an intense and sustained education can do in the reform of the character of the unrepentant ‘dirty’ Ghanaian.

Like Goliath in the Bible, the giant Henry thought he could defeat the small droppings of filth across the capital by engaging the services of desperate unemployed youth as a weapon in addition to his personal traits.

Recruiting over 800 personnel, branding them in uniform after military training to step up efforts in enforcing by-laws will come to not if what we see on our principal streets after three weeks of their presence remains the same. The honourable Member of Parliament for the Ayawaso Central constituency has failed his first test.

On July 8, 2022, an order was made for the removal of all billboards and unauthorized banners from across the city ahead of his party’s (NPP) national delegates’ conference. Some of us waited patiently with much curiosity to see if indeed the “City Response Taskforce” – CRT, will swiftly respond to the call to remove these materials from our principal streets. But, a week after the conference, posters and banners are still littered and hanging loosely at places including the Kwame Nkrumah Circle interchange.

The CRT was tasked to enforce by-laws and ensure orderliness. They’re to instil some sense of discipline and cleanliness in our communities. Their scope of operations and mandate per ‘our’ understanding could be the panacea to our old traits of living life without cause to filth. It may be early days yet, but, the elders say, “a corn that will grow bigger starts from germination”.

The men we see idling on our roads and in some ‘insane’ cases standing right by a heap of refuse don’t look like men with a sense of responsibility. Why must they be responsive instead of proactive in the first place? That’s where education is expected to bridge the gap and lessen the pressure required in response.

Assuming the response mechanism must be adopted as admonished by the regional minister in his deployment speech, that must come with some level of reasonable force in my candid view. Knowing the Ghanaian attitude, it will take some level of force in response to someone who foolishly drops a sachet on the streets, market square or lorry parks.

I’m all for a clean Ghana agenda profoundly in the capital city and for that matter making “Accra Work Again”.

And anything that will signify a clear failure bothers a concerned citizen like me and any like-minded person.

According to the minister, about 15,000 National Service personnel, over 2000 men and women drawn from the security services and about 2000 Youth Employment Agency-YEA and Zoomlion workers are supposed to offer support. Adding Zoomlion to the list, to some of us, is just like pouring fresh palm wine on a fermented one. The taste has been diluted. You don’t expect an organization that has almost failed in living up to expectations as far as cleaning the city is concerned to be the ones offering support to fresh agile men who are ready to work.

If these huge numbers can’t keep at least some key places like the Kwame Nkrumah Circle Interchange and other landmark streets tidy in a matter of 3 weeks and sustain efforts of ensuring no one litters, then, the intention remains a good one but an “F” awaits the programme on the scorecard.

I am careful not to predict that soon, just like NABCO, they’ll also be on the streets agitating for unpaid allowances but, I am optimistic there is light at the end of the tunnel. The scorecard will be out by 2024, but until then, there is more room for improvement. Let’s get the basics right. Akpe