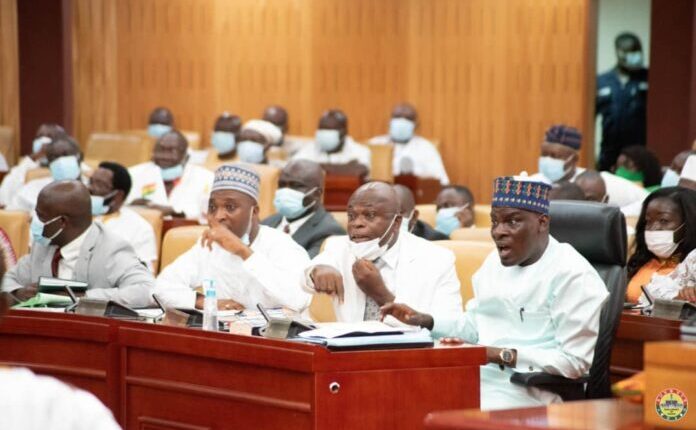 The Minority in Parliament has described a petition against former deputy Attorney General Dr Dominic Ayine as an attack on free speech.

The Judicial Secretary, Justice Cynthia Pamela, on June 3, 2021, petitioned the General Legal Council to investigate the Member of Parliament for Bolgatanga East over comments he made during a Ghana Center for Democratic Development (CDD-Ghana) roundtable discussion on ‘Presidential Election Petitions and their Impact on Africa’s Democracy’ on May 5, 2021.

The Judicial Secretary, who wrote on behalf of the Chief Justice, Kwesi Anim Yeboah, described the MP’s comments as ‘unacceptable and hence directed the GLC disciplinary committee to investigate him.

In response, the minority in parliament said it an attempt to bring back a silence of culture on dissenting view.

“It is against this backdrop that we, the Minority Caucus in Parliament, find this invitation to be in utter bad faith and meant to be an attack on free speech on Parliament, as an institution, and also an affront to democratic and academic freedom.”

“This invitation is also seen to be an attack on freedom of expression and deepens the growing concern about the culture of silence, which is gradually lingering its ugly head in our democratic dispensation,”  the statement read.

“We note with regret that the Chief Justice is on record in recent times to have demonstrated his intolerance for dissenting views, particularly those emanating from Minority Members of Parliament.

“Not long ago, the Hon. Rockson-Nelson K. Etse Dafeamekpor, the NDC Member of Parliament for South Dayi, received a similar invitation to appear before the Disciplinary Committee of the General Legal Council.

“We are also aware of invitations to other members of the National Democratic Congress in the very recent past for statements which allegedly criticized some decisions of the Supreme Court,” the statement added.

Dr Ayine is alleged to have said that the Supreme Court’s failure to apply the rules of procedure and the continuous dismissal of the 2020 election petitioner’s applications were the basis of his statement.

“Adjudication is the process of accountability. So, for me, it is okay to dismiss an application brought by a petitioner for one relief or the other, whether substantive or procedural”.

“But it is another thing to fail to apply the rules of procedure in a manner that enhances the accountability process. So, at the end of the day, the petition actually dampened my hopes with respect to the independence of the judiciary and its ability to hold the Electoral Commission, in particular, accountable in election petitions,” he is quoted to have said.

Meanwhile, the Executive Director for CDD, Professor H. Kwasi Prempeh has also criticized the petition against the NDC lawmaker describing it as an attack on free speech.