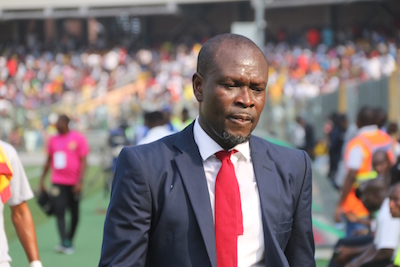 CK Akonnor bids farewell after being axed from the Black Stars

Akonnor was dismissed by the Ghana Football Association (GFA on Monday and his assistants after a series of unimpressive performances, the latest being Ghana’s 1-0 defeat at the hands of South Africa.

The 47-year-old won four, drew two and lost four of his 10 games in charge as Black Stars head coach.

In a tweet confirming his dismissal, CK Akonnor thanked President Akufo-Addo and Ghanaians for the opportunity to serve and wished the team well in their future endeavors.

”I’m grateful to H.E President Nana Addo Dankwa Akufo-Addo,the Sports Ministry,my former boss Kwesi Appiah, the leadership of the GFA, colleagues I worked with, players and Ghanaians for the opportunity to serve. Wishing the team all the best. Thank you Ghana,” he posted.

Akonnor lasted 21 months in charge of the Black Stars after taking over from coach Akwesi Appiah whose contract was not renewed upon expiring.

The Ghana Football Association is expected to name his replacement in the coming days. The Executive Council of the GFA has constituted a 3 member committee to find a head coach and assistant coaches for the Black Stars within the next 72 hours.

The Black Stars take on Zimbabwe in their next round of World Cup qualifying campaign games in October 2021.