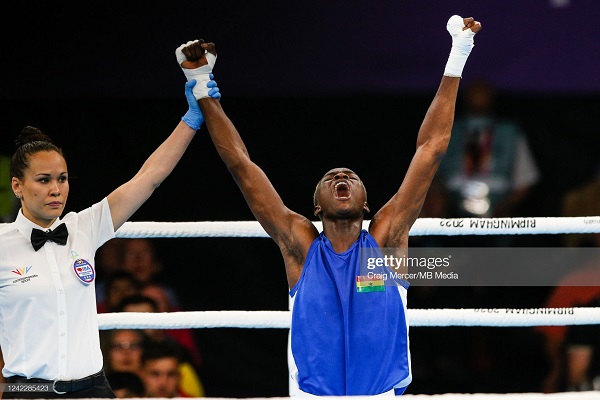 Featherweight boxer, Joseph Commey says his quest to win a gold medal at the ongoing Commonwealth Games is on course following a unanimous 5-0 win over New Zealand’s Alex Makuka on Wednesday.

Commey’s qualification to the penultimate round in the featherweight division secured Team Ghana a medal at the games, with the 18-year-old set to return home with at least a bronze.

Commey’s convincing win over Mukuka did not only keep his gold medal target on course but also kept alive Ghana’s hopes of winning medals at the ongoing Commonwealth Games.

Also guaranteed a medal is Abdul Wahid Omar who defeated Alston Ryan of Antigua and Barbuda 4-1 to make it to the semi-finals of the light-welterweight division.

In an interview with Graphic Online, Commey said he was keen on chasing a gold medal to improve on Ghana’s bronze medal feat in the last edition in Gold Coast, Australia.

The 18-year-old boxer praised his trainer for guiding him to achieve a medal at his first international competition for Ghana.

“This is what we have been fighting for since we opened training camp back in Ghana, and I’m glad we have secured a medal.

“But it doesn’t stop us from chasing the gold that we came for. I have to go back to my trainer so we can work harder to secure our target,” Commey said.

Commey has emerged as one of Ghana’s brightest hopes at the ongoing competition, having dominated all his three bouts en route to a semi-final berth.

Reacting to Commey’s victory, the head trainer of the Black Bombers, Kwasi Ofori Asare, said he was confident of securing at least three medals for Ghana in boxing at the end of the games.

“Commey has paved the way for the other fighters to follow, and I am very happy that we have at least secured a medal in boxing for now.

“But we are looking forward to winning at least two more medals to make it three for Ghana.”

On Thursday evening, Abraham Mensah will aim to become the third member of the boxing team to reach the medal zone when he fights Rukmal Prasanna Rukmak Prasanna of Sri Lankain a quarter-final encounter in the bantamweight division.