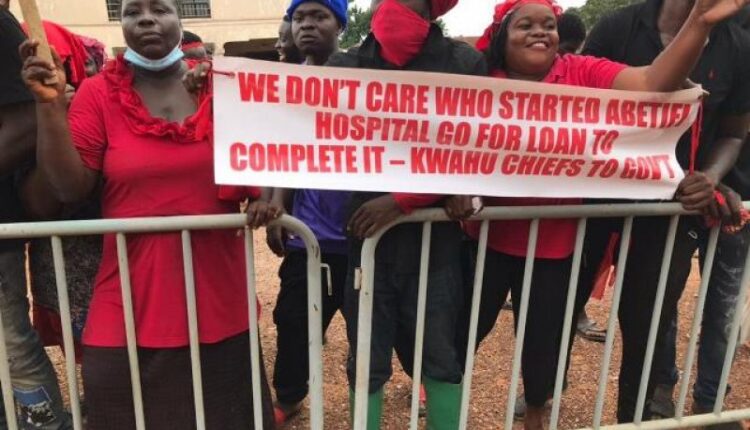 The Concerned Youth of Kwahu East have demonstrated over an abandoned 200-bed capacity Abetifi Hospital Project and pleaded with the government to include it in the ‘Agenda 111’ policy.

The demonstration was led by Mr Godwin Ntiamoah, Convener of the concerned youth, and Mr Kwame Darkwa, Assembly Member of Abetifi Electoral Area.
During the protest, some information displayed on the placards read; “We don’t care who started the Abetifi Hospital, go for a loan to complete it-Kwahu Chiefs to Government, “Why has the Abetifi Hospital been abandoned?”, Our health is our wealth”, “Abetifi Hospital left to rot” among others.
Reading the petition on behalf of the demonstrators, Mr Darkwa said although the Regional Minister had assured of his support in continuing with the project, its budgetary allocation might be needing parliament approval, hence, the delay.
He said it had been over six months since the Regional Minister gave the assurance but to date, nothing had been done on the project.
“We the concerned citizens of Kwahu East are not against the Agenda 111 project, but our simple question is, why should the government start new hospital projects whilst others, which have already commenced are abandoned to rot?” he stated.

Mr Darkwa cautioned that the group was apolitical and that the demonstration was not affiliated to any political group and cautioned the public against tagging it.

Nana Nyakum- Panyin IV, the Adonteng Gyantoafuorhene, Abetifi commended the demonstrators for observing a peaceful demonstration and assured that the traditional authority was ready to rally behind them to ensure the government intervenes to assist the district.
The petition was received by Mr Isaac Kodua, the Kwahu East Deputy Coordinating Director on behalf of Mr Isaac Agyapong, the District Chief Executive while a copy was sent to Akyemfour Asiedu Agyemang III, the Chief of Abetifi.
Story By GNA
AbetifihospitalKwahu
Leave A Comment
Cancel Reply
You might also like
News