President Nana Akufo-Addo has sacked the CEO of the Public Procurement Authority (PPA) Mr Adjenim Boateng Adjei for putting “himself in a position where his personal interests conflicted” his office.

The Commission on Human Rights and Administrative Justice (CHRAJ) found Mr Adjei culpable after a probe in relation to conflict of interest.

His appointment was terminated with immediate effect on Friday, October 30, 2020, and communicated via a letter signed by the Director of Communications at the Presidency, Eugene Arhin.

Additionally, Mr Adjei has been disqualified from holding any public office for the next five years.

President Akufo-Addo acted based on the recommendation of CHRAJ.

It will be recalled that President Nana Akufo-Addo had suspended Mr Adjei on August 22, 2019, after he was implicated in a corruption exposé titled ‘Contracts for Sale’, undertaken by theghanareport.com’s Manasseh Azure Awuni.

President Akufo-Addo further referred the matter to CHRAJ and the Office of the Special Prosecutor.

The latest development was the outcome of the report, which was signed by the CHRAJ Boss, Joseph Whittal.

The dismissal comes a day after Mr Awuni raised concerns at the 2020 Baah-Wiredu Memorial Lecture that authorities had failed to act after his investigative report on the activities of Adjei.

“More than a year since the ‘Contracts for Sale’ scandal, the Office of the Special Prosecutor is yet to tell Ghanaians what it has done about it.  CHRAJ is yet to release its report on the matter. Meanwhile, sources close to the Public Procurement Authority say the suspended PPA CEO still takes his salary and enjoys his benefits as though nothing has happened,” Mr Awuni pointed out.

The documentary, which was released on Wednesday, August 21, 2019, and aired by Joy TV, contained allegations of conflict of interest, abuse of office and corruption by Mr. Adjenim Boateng Adjei, the Chief Executive Officer (CEO) of the Public Procurement Authority (PPA).

In the documentary, a company known as Talent Discovery Limited (TDL), owned by Mr. Adjenim Adjei was found to be getting many government contracts through restrictive tendering.

These contracts were then sold for huge sums of monies to the highest bidder, and the proceeds went into the pockets of the culprit.

After months of investigations, CHRAJ stated in its report dated October 27, 2020, that Mr Adjei “put himself in several positions where his personal, relational, and pecuniary interest in TDL and other companies actually conflicted with the performance of the functions of his office as CEO and Board Member of PPA. The Commission holds that the Respondent [Mr. Adjei] has contravened article 284 of the 1992 Constitution”.

“The Respondent, being the CEO of PPA, the Regulator of the procurement
sector, the Commission is of the strong and considered view that he has
gravely abused his high office of trust, and the appropriateness and
proportionality of any action to be taken by the Commission must be
commensurate with the gravity of the abuse,” the report added. 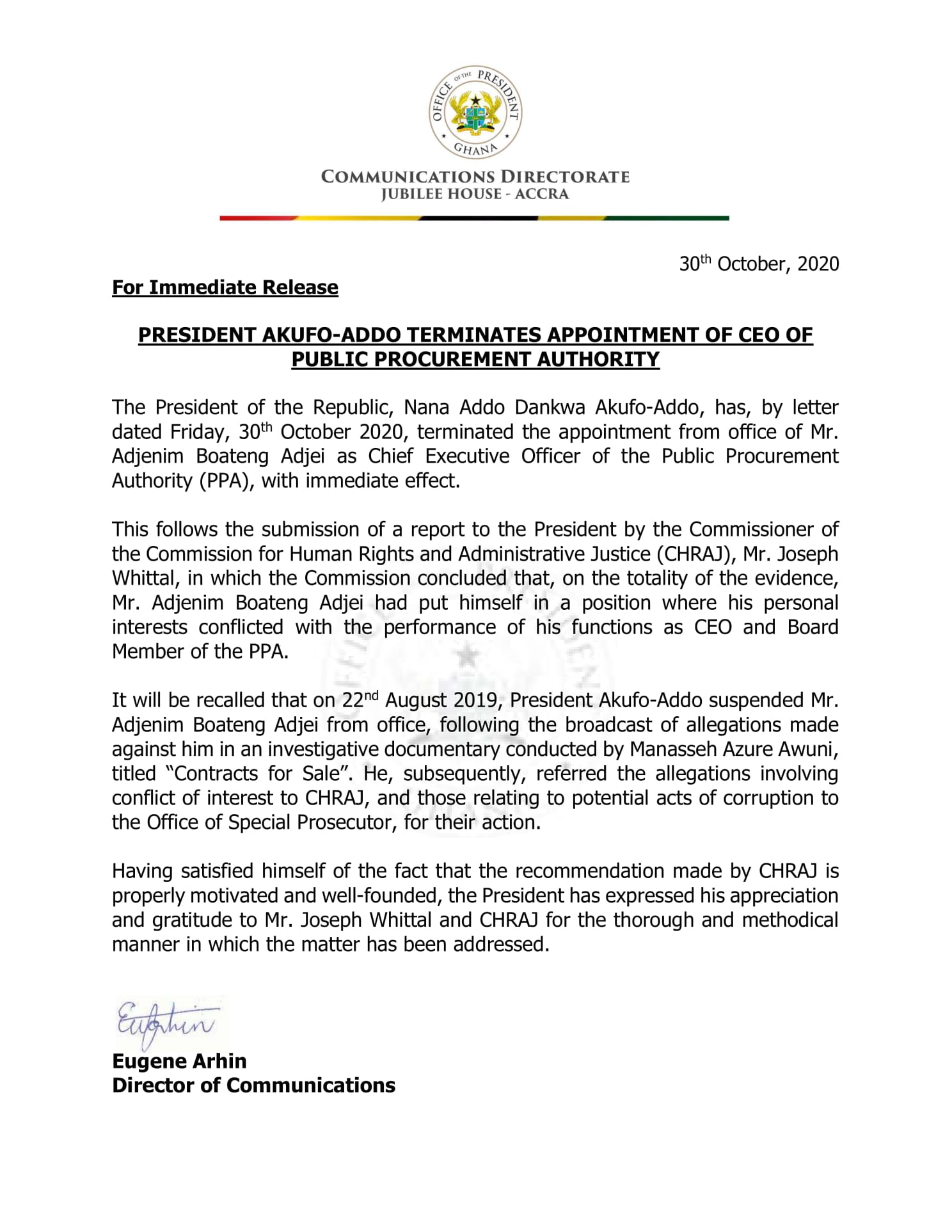 • Although the Respondent claimed that he had resigned as director of
TDL by reason of letter dated 5th September, 2017 addressed to the CEO
and Company Secretary of TDL, all the relevant official records of the
company showed that he remained a director of TDL at all material
times, and that his purported resignation letter had no probative value
whatsoever.

• The evidence supports the allegation that TDL participated in a number
of restricted tenders, which applications came before the Respondent in
his capacity as CEO of PPA and member of the Board of PPA for
approval. TDL was awarded 10 contracts through restricted tender
between June 2017 and 22 August 2019. However, the evidence did not
support the allegation of award of contracts through sole sourcing.

• The Respondent participated in the decision-making process on
restricted tender applications that had TDL shortlisted without
disclosing his private capacity (financial and relational) interest in the
Page 182 of 188 company or recusing himself, except on one occasion, in violation of the Board’s resolution on the matter and Article 284 of the Constitution.

• The evidence further showed that the Respondent, on at least two
occasions, used his office as CEO of PPA improperly by altering the
decision of the Board to the benefit of TDL, a company in which he has
personal (financial and relational) interest.

• Officials of TDL (Thomas Amoah, Administrative Manager, who is also
sometimes described as General Manager, Project Manager or Group
Manager, and Abigail, the Office Secretary), the company in which the
Respondent is majority shareholder and director, were clearly seenand
heard in the documentary offering to sell contracts awarded to TDL by
public procurement entities through restricted tender.

The evidence also established a pattern of movement of large volumes
of cash through the Respondent’s Bank Accounts between March 2017
and August 2019, far in excess of his known income (Stanbic Bank: USD
Account – $516,225.00; Cedi Account – GH₵3.83 million; Euro Account –
EU54.500; UMB Bank: $110,000). The Respondent could not offer
satisfactory explanation to the source of that huge volume of cash that
passed through his bank account between March 2017 and August 2019
(unexplained wealth).

• The totality of the evidence showed that the Respondent had put
himself in a position where his personal interest (financial and
relational) conflicted with the performance of the functions of his office
as CEO and Board Member of PPA.