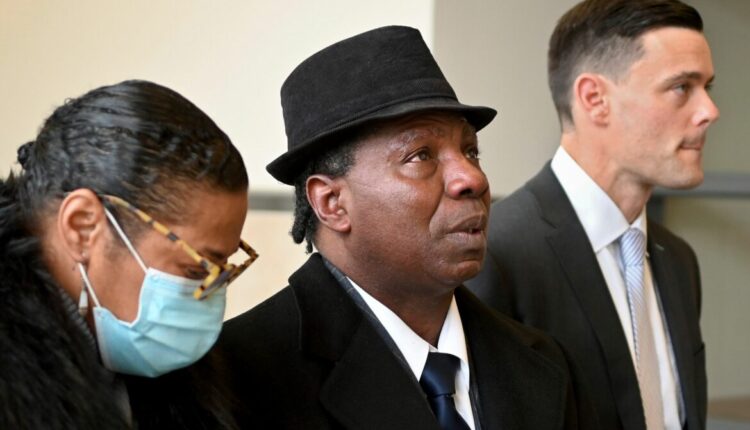 A conviction in the rape of Alice Sebold, the award-winning author of “The Lovely Bones,” has been overturned 40 years later due to serious errors by the prosecution, officials said.

Anthony Broadwater, 61, was cleared on Monday by New York Supreme Court Justice Gordon Cuffy of charges that he assaulted Sebold when she was an 18-year-old first-year student at Syracuse University in 1981. Sebold, now 58, wrote about the attack in her 1999 memoir, “Lucky.”

Sebold picked out another man, not Broadwater, in a police lineup after the assault but later identified Broadwater as her attacker on the witness stand.

She wrote in “Lucky” that Broadwater and the other man in the lineup looked “almost identical” and that she feared a defense attorney would exploit a white woman’s confusion over two Black men.

Broadwater spent 16 years in prison and had been on New York’s sex offender registry since his release in 1999. He’ll now be taken off that list.

Broadwater dropped his head in his hands and sobbed when the judge cleared him. (See the video above.) “I never, ever thought I would see the day that I would be exonerated,” he said after the hearing.

“I’ve been crying tears of joy and relief the last couple of days,” Broadwater told The Associated Press the following day. “I’m so elated, even the cold can’t keep me cold.”

He told The New York Times: “I just hope and pray that maybe Ms. Sebold will come forward and say, ‘Hey, I made a grave mistake,’ and give me an apology. “I sympathize with her. But she was wrong.”

Broadwater recounted the harm the conviction had on his life, even after his release from prison. He refused to have children because of the stigma of the conviction, he told the Syracuse Post-Standard.

“I’m not going to sully this proceeding by saying ‘I’m sorry,’” said Fitzpatrick. “That doesn’t cut it. This should never have happened.”

Broadwater was convicted largely because of Sebold’s identification and because an expert witness testified that microscopic hair analysis had tied him to the rape. The validity of that kind of analysis has since been discounted by the Department of Justice. That was the only purported forensic link to the crime.

Scrutiny of the case against Broadwater increased after “Lucky” was picked up in 2019 for a Netflix film.

Executive producer Tim Mucciante began questioning the conviction as he pored over the script and Sebold’s memoir. He eventually dropped the project and hired a private detective in an investigation that ended up in Fitzpatrick’s office. It’s unclear what will happen to the film now.

Sebold, who lives in San Francisco, could not be reached for comment.

Her most notable novel, “The Lovely Bones,” is about the rape and murder of a teenage girl. The bestseller was made into a movie in 2009.