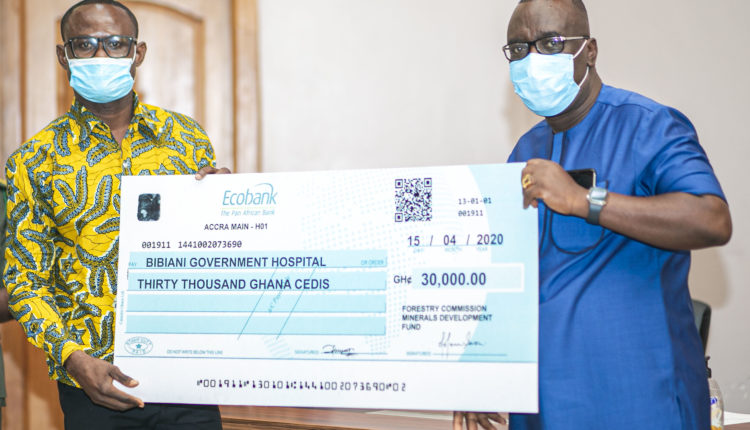 Six hospitals in communities where mining communities operate in forest reserves have benefited from GH₵ 180,000 cash and stocks of medical aid to support their fight against COVID-19.

The donation came from the Liaison Group, a coalition of state institutions that was set up to monitor mining activities in forest reserves from exploration activities, the early stages of the pre-construction phase of projects and subsequently through the operational phase.

Members of the group, chaired by the Environmental Protection Agency, include the Forestry Commission, Ministry of Lands and Natural Resources, Minerals Commission, Forest Services Division, Water Resources Commission, the Chamber of Mines and the Geological Survey Authority.

Speaking at a ceremony at the offices of the Forestry Commission to present the items, the Executive of Director of the EPA, Mr John Pwamang, said the group decide to donate to the hospitals to complement the efforts of the government.

“These are areas that it will take a long time before the government’s support gets to them. We thought it will be proactive to take care of the hospitals so they can also fight the pandemic,” he said.

He urged the management of the hospitals to put the donations to their intended purpose.

The Chief Executive of the Forestry Commission, Mr Kwadwo Owusu-Afriyie, told theghanareport.com that the group believed since it could not give its support to members of the mining community individually, it thought it wise to cater for the hospitals, which were in the forefront of fighting the deadly coronavirus.

“We are in a very difficult time, that even handshakes pose dangers to our lives. Given that our country benefits immensely from these mining communities, we thought it wise to support their healthcare facilities. We must all rally around the government and the President to tackle this deadly disease,” he stated.

He said apart from the six healthcare facilities that had benefitted from the group, the Forestry Commission had also made donations to the Achimota and Legon hospitals in Accra and the Komfo Anokye Teaching Hospital in Kumasi.

Mr Owusu-Afriyie rallied Ghanaians and corporate institutions to do their best to support the government to fight against coronavirus by adhering strictly to the Ministry of Health’s prescribed hygiene protocols.

A representative of the beneficiary hospitals, Nana Ntim Adjei, who is also the Administrator of the Sefwi Government Hospital, expressed appreciation to the Liason Group for their support, which he indicated would go a long way towards fighting the virus, which has killed 17 people in Ghana and infected 2,017 while 212, others have recovered.

Ghana has since 1996 allowed limited mineral exploration and exploitation in some of the country’s forest reserves. However, it was not until May 2001 that the country approved Environmental Guidelines for Mining Forest Reserves to ensure that environmental impacts of mining were fully addressed.

In that regard, the Liason Group, which is made up of all the stakeholders in the mining and environment space was set up to among other responsibilities liaise with mining companies throughout the mining process and play an active role in the formulation of environmental procedures.

They are also to ensure the allocation of 50% portion of the extra ‘royalties’ to the communities affected by mining projects, identified during environmental impact assessment studies to push developmental projects.

Ever since the guidelines came into force, there have been mining in forest reserves, including Supuma Shelterbelt and Tano Offin in the Ashanti Region; Ajenjua Bepo in in the Eastern Region; Afao Hill and Opon Mansi in the Western Region; and Yakombo in the Savannah Region.

The guidelines require mining companies operating in production forest reserves to pay 0.6% extra royalty lodged in an account with the Forestry Commission. 50% of the extra royalty is managed by the commission. 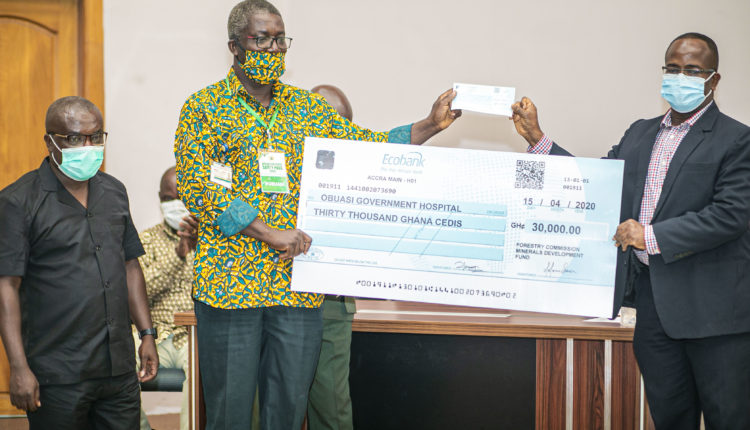