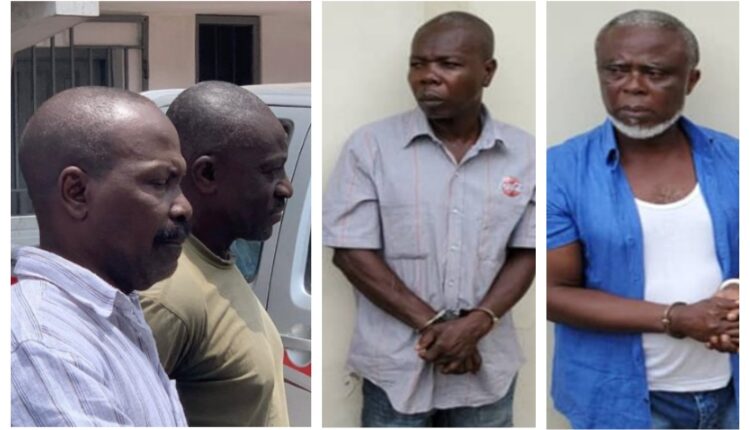 An Accra High Court has admitted into evidence videos and audios that allegedly captured the activities of the 10 persons standing trial in an alleged coup plot.

A high-ranking police officer ACP Benjamin Agodzor, physician Dr Frederick Yao Mac Palm, and eight others were hauled before the court for their individual role to overthrow President Nana Akufo-Addo and kidnap some notable personalities.

The accused face a charge of high treason at an Accra High Court but are currently on bail.

Before the court’s ruling on Tuesday, November 2, counsels for the accused had opposed and attacked the prosecution’s evidence as they closed their arguments on the admissibility of the audios and videos.

They argued, among others, that the exhibits were not from proper custody, relevant, authentic, original, and violated their clients’ fundamental human rights.

They again pointed out that the pen drive recordings were dated 2013, although the prosecution had charged the accused persons for crimes supposedly committed in 2018 and 2019.

On the other hand, state prosecution led by the Director of Public Prosecutions (DPP) Yvonne Attakora-Obuobisa had urged the court to admit the pen drive containing the videos and audios into evidence.

She reminded the court that the said videos and audios form part of the testimony of the third prosecution witness, Staff Sergeant Awarf Sule, and had already been played in open court.

In its ruling, the three-member panel, chaired by Justice Afia Serwaa Asare Botwe, with Justices Hafsa Amaliba and Stephen Oppong as the other members, shot down the arguments by the defence counsel and admitted the hard drive into evidence.

Justice Amaliba, who read out the highlights of the court’s position in open court, said the prosecution witnesses had referred to the exhibits, adding that the evidence on the hard drive was relevant for the determination of the case.

Considering the seriousness of the charges, she said it was in the public’s interest to admit the videos and audios.

“All objections relating to breach of rights, including recording without a warrant, have no merit,” Justice Amaliba said.

The court held that the third prosecution witness admitted he recorded the said videos.

Over a year ago, the high-ranking police officer, ACP Benjamin Agodzor, was charged with abetment to high treason.

Dr Frederick Yao Mac Palm, a medical doctor, has been accused of being the plot’s mastermind.

The accused persons were earlier slapped with six separate charges, including treason felony contrary to section 23 (1) and 182 (b) of the criminal and other offences Act, 1960.

Col Gameli and ACP Dr Agordzo have been charged with abetment to high treason.

In June 2018, security agencies arrested members of the ‘Take Action Ghana’ for an “elaborate plot targeted at the Presidency”.

Dr Mac-Palm invited Kafui, a blacksmith at Alavanyo, to move to Accra to manufacture explosives and pistols for the group to further the plot.

Regarding ACP Dr Agordzo, he is said to have donated GH¢2,000 to TAG to aid its cause and drafted a speech for Dr Mac-Palm to be read at a planned demonstration by TAG.