A Human Rights High Court in Accra has issued a bench warrant for the arrest of the site manager for the Turkish construction firm at the centre of the controversial 22-storey building at Airport.

It follows an application for contempt against the Less Plus Company and its site Manager, Samuel Hinson, by the Association International School.

The court found that Mr Hinson the second responded in the matter has refused to attend court.

When the case was called on Monday for hearing, lawyers for Less Plus Company, the first respondent, said their affidavit in opposition has not been served on the applicant gave the assurance that it will be done.

On the part of the 2nd respondent who is the site manager, the court observed that after the order of substituted service has been posted, Mr Hinson is considered to have been served.

It mentioned that the substituted service was granted as far back as December 5, 2019, and posted on December 20 which was to last for 14 days – a period which had elapsed.

The court presided over by Justice Nicholas Abodakpi issued a bench warrant for the arrest of the site manager, Samuel Hinson.

This came after the lawyer of Association International School, Belinda Pwamang made a request to the court for a warrant to be issued for his arrest.

Reacting to the development in court, Head of the Association International School, Audrey Doyimo, said she was happy justice was being done.

“I am elated in that justice is being done and I thank the court and our lawyer and judge in this case because this case has been going on and it seems as if they flout our laws and they don’t care about our court system and laws in the country”. 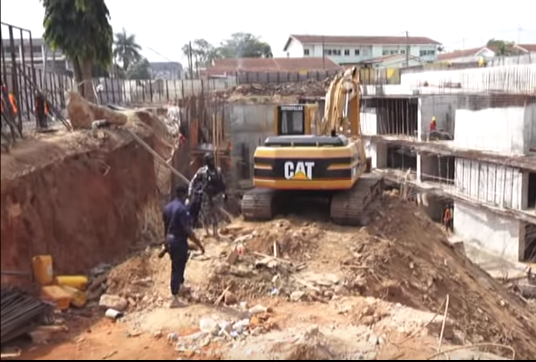 The journey so far

A month ago, the roads and highways minister, Kwasi Amoako-Atta ordered the demolishing of the structure after incessant protest from residents and management of the Association International School.

The angry minister caused the arrest of three foreigners for destroying state property and building without a permit.

The three, who were in the custody of the Bureau of National Investigations (BNI) were supervising the project on the site that had its perimeter extended damaging portions of the asphalt road constructed by the government.

Mr Amoako-Atta visited the area following reports from residents in the community that a Turkish investment firm has employed a developer who was operating illegally.

The residents bemoaned the removal of portions of the asphalt road and heavy construction which was affecting residents and other buildings including structures in the Association International School (AIS) which had developed cracks.

Management of the Association International School and residents of the Airport residential area want the court to place an injunction on the construction works ongoing in the vicinity.

Watch the video of the angry roads minister at the construction site: