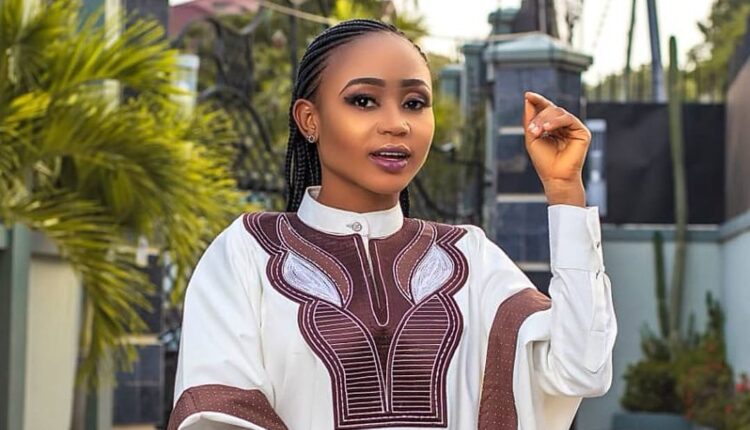 The Court of Appeal has reversed Akuapem Poloo’s 90 days jail term and instead slapped her with a GH¢12,000 fine.

The social media diva Rosemond Alade Brown’s appearance at the Court of Appeal comes after an Accra Circuit Court, on 16 April 2021, sentenced her to 90 days for posting nude photos of herself and her seven-year-old son.

All three sentences were to run concurrently.

After the Circuit Court’s ruling, the team led by Andrews Cudjoe Vortia filed a notice of appeal and an application for the stay of the sentence while the appeal case was being determined.

They asked for a more lenient punishment.

Mr Vortia insisted the custodial sentence handed out to his client for posting a nude photo of herself and her seven-year-old son was harsh.

“The mitigating factors in her favour are greater than the aggravating factors. When you consider this offence, it is not rape; it is not murder. It is a misdemeanour in which she could have been dealt with lightly,” he spoke to the media after the judge’s ruling in April.

It appears the ‘simple’ request for a more lenient punishment did not touch the heart of the new judge Ruby Aryeetey, who also dismissed the appeal, thus Tuesday’s appeal hearing.

Madam Aryeetey upheld the Circuit Court’s ruling because the decision “was not manifestly excessive or harsh”.

The three-member panel of the Appellate court presided over by Justice Henry Anthony Kwoffie, held that the 90-year jail term was fair.

However, the court considered the fact that the convict was a single mother to a seven-year-old boy and substituted the custodial sentence with a fine.

The sentences are to run concurrently.

An earlier decision by the Circuit Court judge

On 16 April 2021, an Accra Circuit Court judge Christiana Cann sentenced Poloo to 90 days for posting nude photos of herself and her seven-year-old son.

Delivering her sentence, the judge said there was a need to give such punitive measures to deter people fond of posting such pictures online.

She also expressed concern about how the societal and moral values of the country had fallen as a result of such practice.

“There is no doubt that apart from the canker of rape, defilement, physical assault, the publication of obscene materials is on the increase.

She then asked two questions she said were critical to the case that the accused Akuapem Poloo failed to do.

Did she ask for the child’s permission before posting the said picture?

Did she respect the child’s rights?

Judge Cann supported her ruling with a scripture, Colossians 3:25, which states, “Anyone who does wrong will be repaid for their wrongs, and there is no favouritism.”

The facts of the case are that the complainant Bright Appiah is the Director of Child Rights International Ghana, whereas the accused person is an actress.

On 30 June 2020, the accused person celebrated her son Mohammed Mudair’s seventh birthday, took a nude photograph with her son, and posted the same on her Instagram page, which went viral.

The accused was arrested.

On her caution statement to police, she admitted to unintentionally posting the nude picture with her son.

In April 2014, a 24-year-old labourer was sentenced to two months imprisonment by the Circuit Court in Accra for posting his ex-girlfriend’s nude pictures on Facebook, a social media platform.

David Dickson Donkoh embarked on the act after his ex-girlfriend had terminated their one-year-old relationship.

In his bid to show his powers, Donkoh posted the complainant’s nude pictures on Facebook after he had asked her to rescind her decision but to no avail.

He was charged with causing emotional, verbal, and psychological abuse to the victim.

He pleaded guilty, and the court presided over by Sedina Agbemeva, convicted him on his own plea.

In July 2019, the Odumase Krobo Circuit Court in the Eastern region presided over by F.Y. Gbeddy jailed a 29-year-old man, Prince Teye, for three years for circulating a nude photograph of his ex-girlfriend on social media.

The accused person was sentenced to three years with hard labour by the court on the charge of extortion.