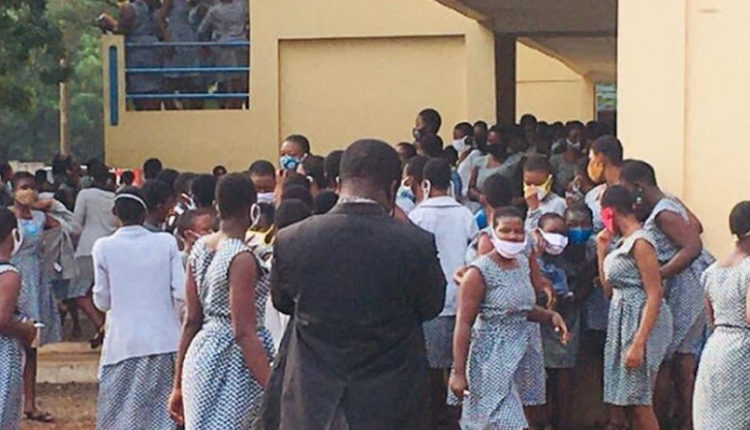 A total of 648 people have been identified and quarantined at the Accra Girls Senior High School (SHS) after COVID-19 was detected at the school.

The school recorded the first case on June 29, after some students showed signs of the infection. They were later taken to the Ga East Municipal Hospital for treatment on Saturday, July 4.

Further laboratory analysis showed that six students were carriers of the coronavirus.

The quarantined persons also include “an instructor and his wife.”

Some police officers, and COVID-19 task force officials from the Ayawaso North Municipal Assembly, have been deployed to the school to calm the situation.

Parents insisted on picking up their wards as the police barricaded the entrance to the school, following reports of agitations by the students on the school campus.

However, Dr Adutwum has allayed fears of parents expressing frustration and concerns about their wards to take them home.

Dr Adutwum said a team of 200 persons from the Ghana Health Service (GHS) was addressing the health issues.

Professional counsellors have also been stationed at the school to offer support to the pupils as they embark on academic work.

The school has 701 final year students preparing for the West African Senior School Certificate Examination (WASSCE) while 459 Gold Track students are on campus to complete their term.

Surveillance has been heightened with joint inspections from the Ghana Education Service (GHS) and the GHS. Officials are implementing measures to ensure a safe environment for teaching and learning.

Meanwhile, there are nearly 20 cases in various schools across the country.

The Director-General of the GHS, Dr Patrick Kuma- Aboagye has said that they were reports of “three cases in Wesley Grammar, we have two in Odorgonno.”

He continued: “We have people in Ada Secondary whose samples have been taken because we have suspected cases”.

He added: “In Central Region, my current evidence is (that) we have two cases – Mfantsipim (and) one in Mankessim”.