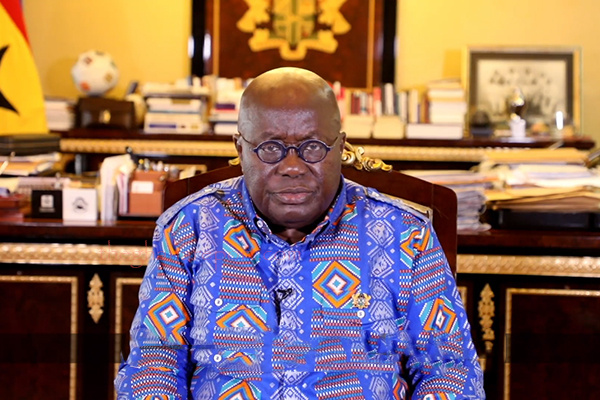 President Nana Akufo-Addo has given an indication of easing social gathering restrictions in the wake of the coronavirus pandemic.

“Stakeholder consultations are taking place on the way forward on the easing of restrictions so that our social and economic life can go back to normal.

“I expect these consultations to end this week, so that I can announce to Ghanaians a clear roadmap to easing the restrictions. We have to find a way back, but in safety, as we cannot live with these restrictions forever,” he said in a speech to mark the virtual Eid-Fetr celebrations on GTV.

With the government’s social gathering restrictions forbidding the congregation of the Islamic faithful, their leaders turned to the state broadcaster to televise the event held in the studios of GTV.

The government on March 15 announced a ban on social gatherings to tame the spread of the virus. The country’s borders remain closed.

The timeline for the restrictions expires on May 31, by which time, the government is expected to announce new measures as Ghana’s case counts reaches more than 6,000 with 32 deaths and almost 2,000 recoveries.

Ban on public gatherings extended for another two weeks

Unlike the apocalypse predictions of western health experts who warned that more than 300,000 people could die from the virus in Africa because of fragile healthcare systems, it has rather been the opposite.

Although African countries, including Ghana, continue to record cases, the mortality rates are lower—a feat attributed to the continent’s youth population.

That and many other reasons appeared to have fortified the President’s resolve to return the country to the new normal, amid the enforcement of hygiene protocols.

The President said while premature death could be devastating, the hard fact was that the rate of COVID-19 deaths in Ghana, “among confirmed cases is very low, one per one million, that is 0.0001%. one of the lowest in Africa, and indeed the world.”

“This is in spite of the high number of tests we are carrying out. This has been so since the very beginning of the outbreak two months ago. The number of positive cases stand at 6,683 out of 194,763 tests conducted,” he observed.

With almost all the 32 deaths from the virus in Ghana recorded within 24 hours of the patients being admitted, as a result of other underlying 1diseases, the President said he was more than convinced that “Ghanaians are not dying of this virus as the numbers originally anticipated and feared.”

“The numbers of severe cases that have been hospitalised has been persistently low since the outbreak. The fear that our hospitals will be overburdened and overwhelmed has so far not materialised,” he said of the doomsday predictions.

As of May 24, there were 16 patients with severe cases in hospitals dotted across the country, but none of them is on a ventilator, the President also announced.

With Ghana’s strategy of tracing, testing and treating receiving high ratings in medical circles around the world, the President stated that the government had a more robust mechanism for enforcing its central strategy of defeating the virus.

He said the tracing teams were now more experienced and efficient while the country’s testing centres had become more decentralized in Ho, Tamale, Navrongo, Takoradi and Cape Coast with treatment centres evenly distributed across the country.

President Akufo-Addo said adherence to the safety protocols and healthy eating habits would make Ghanaians face the future with confidence but urged Ghanaians to stick to the protocols.

“Your adherence to the safety protocols that the government put in place to fight the virus has saved many lives, for which we are all grateful,” he said while applauding the leadership of Moslem community, who for the first time observed Ramadan with mosques shut down.

The President expressed optimism that next year’s event would not be restrictive,  but rather it would return to its conventional venues- Black Stars Square in Accra and other centres.

In a speech read on his behalf, the Chief Imam, Sheikh Usman Nuhu Sharubutu , who earlier led the faithful in prayer, said COVID-19 had drummed home the idea that moslems did not need to congregate to pray.

“We have learnt to focus on the substance and the worth of our worship instead of the form. We are confident that in spite of the COVID-19 social gathering restrictions, we are confident of our fasting in this month has not diminished. We have maintained the quality.”

He said the Moslem community would warm up to the easing of restrictions and fumigate all its institutions to prevent the spread of the virus.