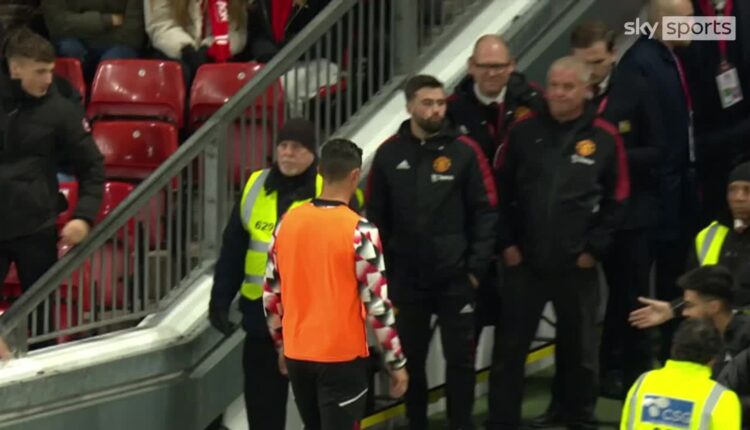 Cristiano Ronaldo has been dropped for Man United's trip to Chelsea as punishment for refusing to go on as a late substitute and leaving early in Wednesday's win over Tottenham;

Erik ten Hag has confirmed Cristiano Ronaldo refused to come on as a late substitute against Tottenham before the striker left early during Wednesday’s victory.

The Manchester United manager has dropped Ronaldo for Saturday’s trip to Chelsea, live on Sky Sports, as punishment, after he previously left early during a pre-season friendly against Rayo Vallecano.

In his pre-match press conference, Ten Hag confirmed reports Ronaldo refused to come on and said: “What (happened in) the talk is between Cristiano and me. The (club) statement is also clear.

“I am the manager, I’m responsible for the top sport culture here and I have to set standards and values, and I have to control them. We are a team.

“After Rayo Vallecano, I said it’s unacceptable but he wasn’t the only one. That is for everyone, when it’s the second time it will have consequences. That is now what we did. We’ll miss him tomorrow, it’s a miss for the squad but I think it’s important for the attitude, mentality for the group.”

“Cristiano will not be part of the Manchester United squad for this Saturday’s game against Chelsea. The rest of the squad is fully focused on preparing for that fixture.”

“I think it will be a reflection for him and also for everyone else,” said Ten Hag on what he hoped Ronaldo’s punishment would achieve. “I set a warning at the start of the season and the next time it has to be a consequence. When you are living together, playing together, football is a team sport and you have to fulfill certain standards and I have to control it.”

Man United recorded an important win on Wednesday over top-four rivals Tottenham, but the Ronaldo incident threatened to overshadow their preparations for the trip to Chelsea.

“When you play in top football sometimes there are rumors and noise, you have to focus on the job and that is to perform tomorrow.”

Ronaldo released a statement on Thursday that said: “As I’ve always done throughout my career, I try to live and play respectfully towards my colleagues, my adversaries, and my coaches. That hasn’t changed. I haven’t changed.

“I’m the same person and the same professional that I’ve been for the last 20 years playing elite football, and respect has always played a very important role in my decision-making process.

“I started very young, the older and most experienced players’ examples were always very important to me. Therefore, later on, I’ve always tried to set an example myself for the youngsters that grew in all the teams that I’ve represented.

“Unfortunately that’s not always possible and sometimes the heat of the moment gets the best of us.

“Right now, I just feel I have to keep working hard in Carrington, support my teammates and be ready for everything in any given game. Giving in to the pressure is not an option. It never was.

“This is Manchester United and united we must stand. Soon we’ll be together again.”