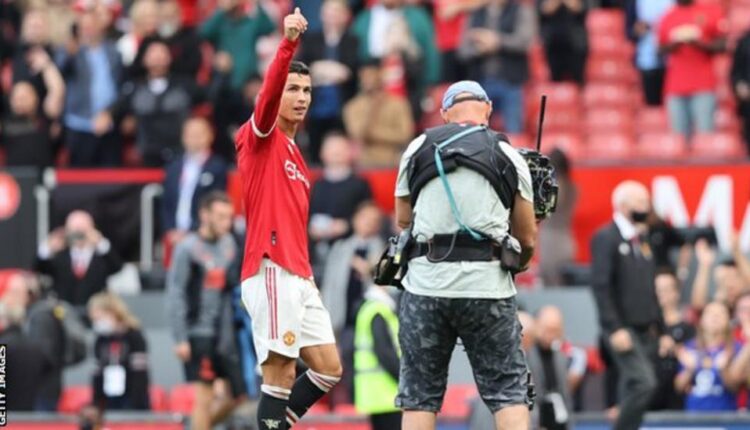 A full hour after referee Anthony Taylor had blown the final whistle on Cristiano Ronaldo’s two-goal return to Manchester United, the euphoria around Old Trafford was still hard to escape.

Hundreds of fans opted not to leave the stadium until the club answered their demand and brought Ronaldo out for his TV interview commitments.

His acknowledgement triggered more cheers and another airing of the ‘Viva Ronaldo’ chant it had been impossible to escape around the stadium from mid-morning.

Outside, a supporter, well into his 20s, showed off to a mate by attempting the Portuguese’s distinctive spin celebration.

These moments, and indeed those that followed on the pitch a few hours later, are the reason Manchester United swooped to re-sign the Portugal captain.

The effort from so many senior figures to get Ronaldo back to the club from Juventus – and keep him out of Manchester City’s clutches – was not really with a home win over Newcastle in mind.

But the joyous spin-off from victory against a side who have won once at Old Trafford since 1972 is light years away from the angry scenes at the same place just over four months ago, when the game with Liverpool was postponed amid furious fan protests.

Not everything in Manchester United’s garden is rosy, because there were some chants against the Glazer family and their ownership of the club, but with their team back at the top of the Premier League, Ronaldo’s arrival has fuelled optimism at levels rarely seen since Sir Alex Ferguson retired in 2013.

“He is a legend, the epitome of everything you know about football. We don’t talk now about people like Pele and Maradona. These guys proved their talent at the time but belong in a museum now. In the modern times, is it Ronaldo? Is it Messi? Who is the greatest scorer in the Champions League? Ronaldo. Most goals in international football? Ronaldo. He broke records at every level. It is Ronaldo.”

It is just before 10am and I am chatting to Jan, a Manchester United fan, initially from Angola but who now lives in Beswick – very much Manchester City territory. He has a ticket for the Newcastle game but wanted to come to Old Trafford early to get a Ronaldo scarf and make sure he is properly kitted out for when he returns for the match.

A couple of hours later and the numbers have swelled, from hundreds to thousands. The ‘Viva Ronaldo’ chant rumbles down Warwick Road from the Trafford Pub past the cricket ground that should have been hosting India, all the way to the Metrolink stop.

Grey-haired men are proudly walking towards the football ground wearing Manchester United’s distinctive red shirt with the famous ‘Ronaldo 7’ on the back.

Just over 90 minutes before kick-off, there are huge numbers behind the barriers erected to keep fans away from the tunnel area where the team coaches pull up.

Even though the players are only visible for half a dozen strides before they go through their entrance – and not at all if you happen to be on the driver’s side of the barriers – they still want to be there for the start of Ronaldo’s grand return. For most, confirmation of their hero’s arrival only comes from the loudest of a succession of cheers that greets Ole Gunnar Solskjaer and his team.

From then on, though, the absence of live TV coverage meant only those in the ground were witness to the great return. And it went absolutely to plan.

He barely has to do anything to earn a chant. His name is read out, along with a “welcome home”, confirming his place in the starting line-up, something his manager said was never in doubt.

His appearance for the warm-up is accompanied by a wave of acknowledgement. His first touch, first goal, second goal, exit after the final whistle and his re-appearance for that interview – all trigger Ronaldo adulation. It is almost as though the four Champions Leagues, four league titles and four Ballons d’Or he has won since leaving the club in 2009 are somehow part of his Manchester United legacy.

It is not true of course. Indeed, at the age of 36, he has been signed to bring exactly that kind of silverware back to Old Trafford.

The road will be long and – specifically in the form of Manchester City, Chelsea and Liverpool – there are some major obstacles in the way.

But, in addressing his new team-mates as a collective on Friday and by being at the centre of the celebration for the team’s other goals against Newcastle – scored by Bruno Fernandes and Jesse Lingard – Ronaldo seemed to be saying ‘it’s not all about me’.

This was though. And the Manchester United fans lucky enough to be there to watch really enjoyed it.