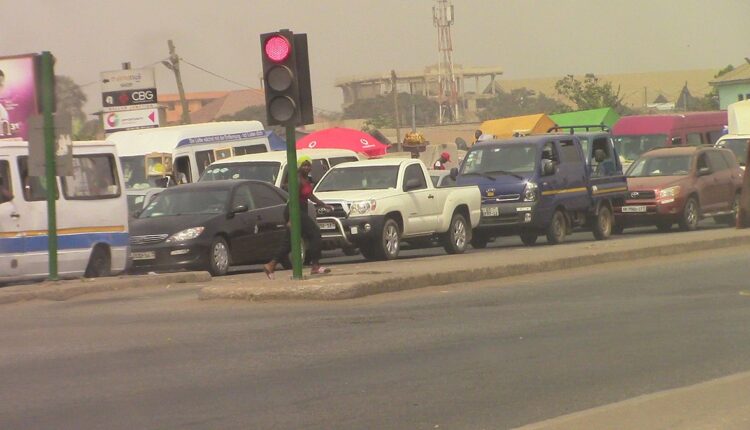 Deep cracks and other road surface defects have developed on the Kaneshie – Mallam Road, also known as the K. A. Busia Highway in Accra, creating a nuisance and wasting man-hours.

The road defects include the separation of aggregates from the binding materials, making the surface rough, the formation of depressions, mesh-like cracks known as alligator cracks, potholes and huge trenches often called craters.

The situation is worse at the Odorkor traffic intersection, where a deep crater has developed, thereby posing a great danger to motorists and pedestrians.

The situation has resulted in the slow movement of vehicles on the 10-lane highway, leading to the build-up of heavy traffic in the area, especially during rush hours.

There is another crater on the side road on the Mallam-Odorkor side of the road as well as potholes on the opposite side travelling from Kaneshie towards Mallam, as well as on the inverse flow of traffic from Mallam towards Kaneshie.

Upon reaching the craters from either end of the road, the drivers are compelled to slow down to pass through the craters.

Driving from First Light to the Sakaman Junction for instance and vice versa, motorists have to contend with the potholes and gullies in the course of their journey.

Other dangerous spots on the stretch are near Accra Academy, Dansoman Junction, Darkuman Junction, Odorkor and Sakaman.

The situation is worse at night when there is poor visibility. At Odorkor, some motorists meander their way around the craters so that they do not damage their vehicles and in order to move a little faster.

However, in the course of meandering, they sometimes come close to grazing the sides of vehicles, creating panic.

Drivers using the inner lane from the Busia Junction, turning towards Odorkor are also affected by the problem.

The Daily Graphic team witnessed several incidents during a visit to the traffic lights area last Tuesday to observe the situation.

For instance, in the morning, while the traffic congestions stretched as far as to the Sakaman Junction for vehicles coming from the Mallam, the traffic jam stretches from the Darkuman Junction towards the Odorkor traffic lights for those coming from Kaneshie going to the opposite end in the evening, about 500 metres long.

In separate interviews, motorists who ply the Dr Busia Highway expressed concern about the situation in view of the precious hours they spent in traffic to go through the area.

They said the situation required urgent attention to ensure the free flow of vehicles so as to boost productivity.

One of such motorists, Yaw Ansah, said driving through the Odorkor traffic intersection had been ‘hellish’ as a result of the time spent in traffic.

“This place used to be one of the free-flowing traffic areas on the Dr Busia Highway but unfortunately, that has changed,” he said.

Another motorist, Moses Arthur, said the situation was serious, especially with the prices of petroleum products, adding that “we end up burning all the fuel we buy with our money. Look at fuel prices nowadays, master, something must be done now,” he said.

A resident at Odorkor, Uncle Sam, said the craters could have been stopped from expanding given that they started very small.

“The craters here started very small but because we left them unattended, they have expanded, now see the problem we are having. These must be patched immediately to ease the travelling on the road,” he said.

A resident of Kasoa, Efo Kwaku, who uses the road daily, said the entire stretch needed some work but in the short term, the Odorkor traffic area needed urgent attention before the unexpected happened.

‘’I have seen some drivers escape accidents by the skin of the teeth when they attempted meandering round those gaping holes.

“Let us not wait for an accident to happen before we set up a committee to, as usual, investigate a problem whose solution we all know,’’ he said.