Story By Malcolm Ali On Jun 26, 2020
Share
Okomfo) Kwadee, undoubtedly, is one of the best musicians in the history of Ghana music. By far, he is a living legend in the ‘kasahare’ music as he calls his genre of music. Despite being off from the music scene for a very long time, his music continues to make waves to the admiration of all music lovers, including this writer.
The lyrical content of Kwadee’s songs are uniquely unique, his stagecraft is different, making him an outstanding musician who portrays the typical Ghanaian culture and setting in his music and videos. He is the only musician who uses folklore to interweave the fibre of his music, reincarnating the forgotten institution that hitherto bond Ghanaians to their culture and tradition. 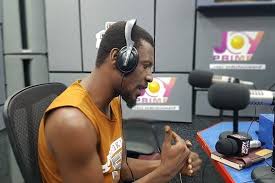 Kwadee is naturally a talented musician who, even in his difficult times, can sing every line of his lyrics word-by-word whenever he is given the opportunity in an interview.
Before Kwadee’s current misfortune, some sound engineers who have worked with him talked about his lifestyle as someone who lives in his own world with an amazing talent. Kwadee is a marketable commodity and needs a good manager who will understand him and look beyond the horizon to tap the potentials in him and not the tag of his health status.
So it happened that a certain beautiful curvy Coca Cola shape lady with an alluring charm, that is capable of tempting men with abnormal testosterone to commit crime, appeared on TV3 Date Rush, a programme that gives young ladies and gents the opportunity to find their love.
Her mission, like any other lady on the platform, was to find a guy to date with. The day she appeared on the show was arguably the best among all. She added flavour to show with her heavyweight moves. She showed ‘sympathy’ to a guy who offed his rush (light). She asked the guy to turn his rush on again and chose him in the end.

Social media went bizarre. All were talking about the lady.
While some were talking about her positive side, others turned native doctors to diagnose her without medical certificates. They claimed the lady had mental health issues and had been deported by her parents abroad. Whatever necessitated that social media bash was not readily known because the lady didn’t show any form of behaviour that suggested that she had mental health issues. Even if she did, it was unethical to jump to social media.
So a few weeks ago on the TV3 Date Rush Réunion programme, after the lady and her guy narrated how far they have gone with their relationship, the host asked the lady if she has mental health issues, as it is being speculated and she answered in the affirmative. She told the host that she is living with Schizophrenia.
Now the question is, how did social media gossipers get to know that she had mental health issues and why did they have to tell the world about it without respect to her confidentiality? And why did TV3 ask her live on TV set? Couldn’t TV3 asked her that question backstage before the programme?

We are living in that part of the world where people have no respect for persons living with mental illness. Even if they do not exhibit apparent signs of mental illness, people will create room and subject them to shame because they are aware of their mental health issues.

Those who took to social media to announce her mental health issues may be people she probably lives with in the same community. They may be her schoolmates or even people she met at the hospital. What they have forgotten or probably are not aware is that persons with mental health issues can live a normal life like any other person in society. We relate with them at the bank, at the hotel, at the restaurant, at school, at the hospital, at the church and so on.
They do not have any tag on them as living with mental illness and so you probably didn’t know. And do not stigmatise them when you get to know. They are not mentally ill. They only have it as a disease like any other diseases.

Instead of those gossips who knew her condition to praise her, they rather blinded themselves with negativity. They failed to applaud her for breaking the barriers of self-stigma to mount such a stage. She is a definition of confidence. She is telling the world that mental illness is not a death sentence. She is telling the world that you can still function well despite having mental health issues.

We are products of a culture that even frowns on the mentally challenged in our society. So most often than not, we run to the saying that no matter how recovered the mentally challenged person is, he or she still reserves some small amount of mental illness to frighten children. It is this same mentality that has left Kwadee on the streets of Santasi despite his music talent.
We need to change the narratives. The chief and community leaders must take up the mantle of mental health education. The government should resource psychiatric hospitals to intensify mental health education. The church and the mosque can play a crucial role, together we can eradicate the myth surrounding mental illness.
There is no sound mind without mental health.
Mental illness in GhanaPerceptions of the mentally in GhanaTV3 Date Rush controversiesTV3 Date rush particpants
Leave A Reply
Cancel Reply
You might also like
Headlines

The brouhaha over Togoland Plebiscite: The historical fact

Arise Volta Region: Do not be misled by enemies pretending to be friends!