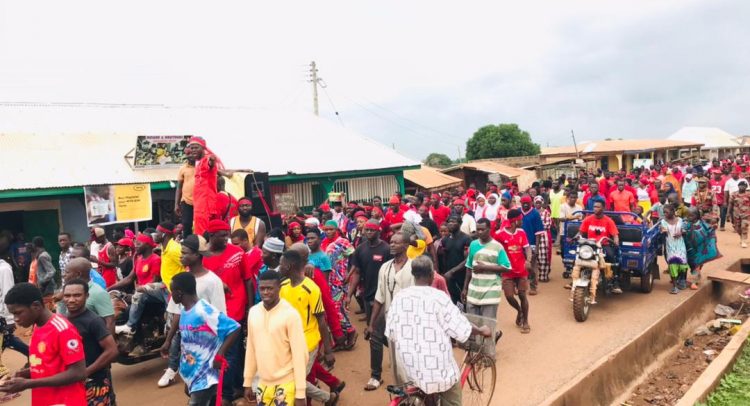 A group by the name Concern Youth of Salaga in the East Gonja Municipality of the Savannah Region has demonstrated over erratic power supply in the area.

The youth matched through the municipality amidst drumming and dancing holding placards with inscriptions such as “ We need a substation now,” and “Enough of the unnecessary disconnections in Salaga” among others.

According to the concerned youth, even though the supply of power has been erratic in the past seven months, electricity consumers in Salaga are grappling with increases in their billings from the power producer.

They indicated that the erratic power supply spanning several months remains unpredictable and unannounced and that it is affecting households and businesses.

“ We the youth of Salaga are very peaceful and law-abiding and because of this NEDCo/VRA have taken the good people for granted. However, if no action is taken to avert this degeneration of power supply, the good people of Salaga may be compelled to take drastic action against the power company.”

Convener of the Concern Youth of Salaga, Ibrahim Anyars, addressing journalists in Salaga recommended that the Minister of Energy should instruct NEDCo/VRA to dedicate officers at Chamba in the Nanumba North district purposely for fault identification and reporting especially in the rainy season.

He also recommended that in the medium to long term, a sub-station should be established in the East Gonja Municipality to serve Salaga and its environs which will reduce the load on the main transmission line traveling from Yendi through Bimbilla.

“The East Gonja municipality should be connected to the national grid from Fufulso which is 40km away from Salaga in the Central Gonja district of the Savannah region which draws its power from the Bui Dam project for a reliable supply of power.”

Mr. Anyars however disclosed that the Concern Youth of Salaga has given NEDCo/VRA a 14days ultimatum to resolve the erratic power supply issues or face their wrath.

Meanwhile, the East Gonja Municipality Coordinator, Chief Ibn Zakaria Wumbei, who received the petition on behalf of the MCE thanked the Concern Youth of Salaga for a peaceful demonstration.

He assured the youth that the petition will be handed over to the appropriate authorities for the necessary action.