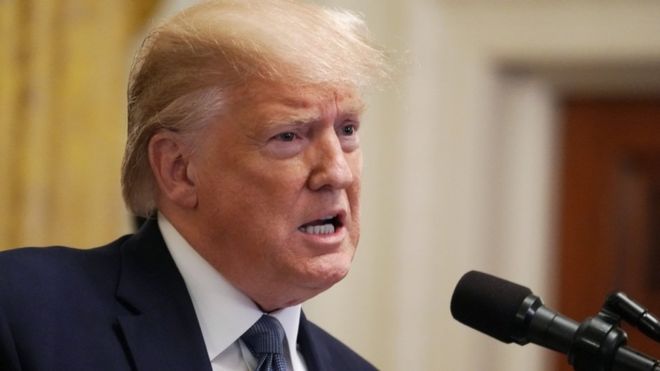 US Democratic lawmakers have demanded documents from the White House as part of their impeachment inquiry into President Donald Trump.

The documents relate to a call between Mr Trump and Ukrainian President Volodymyr Zelensky on 25 July.

The impeachment inquiry stems from the call, which was flagged up by a whistleblower in August.

The whistleblower alleged that Mr Trump used a $400m military aid package to Ukraine, which had been suspended earlier in July, as leverage to persuade Mr Zelensky. The White House released the aid in September.

Mr Trump has denied any wrongdoing, accusing his political opponents of a “witch hunt”.

But in a move to crank up the pressure on the president, the three House committees leading the investigation have given him until 18 October to hand over the documents.

“We deeply regret that President Trump has put us – and the nation – in this position, but his actions have left us with no choice but to issue this subpoena,” the Democrats wrote in a letter to the White House.

The subpoena – an order to hand-over evidence – was issued on Friday by the chairmen of the committees for Oversight, Intelligence and Foreign Affairs.

White House press secretary Stephanie Grisham sought to play down the subpoena, saying it “changes nothing”.

A separate request for records has also been sent to Vice-President Mike Pence, with Democrats asking him to clarify “any role you may have played” in Mr Trump’s overtures to Ukraine.

If Democrats manage to impeach Mr Trump – by way of a vote in the House of Representatives – a trial would be held in the Senate.

Senators would have to vote to convict Mr Trump by a two-thirds majority to remove him from office.

But that outcome is seen as unlikely given that the president’s fellow Republicans control the Senate.

What documents are the Democrats demanding?

In their letter to the White House, the committees accused Mr Trump of “stonewalling” multiple requests for records relating to his July 25 call with Mr Zelensky.

By refusing to voluntarily release the documents, the Democrats said Mr Trump had “chosen the path of defiance, obstruction, and cover-up”.

Failure to comply with the subpoena would amount to “evidence of obstruction”, which is also an impeachable offence, the committees warned.

On Friday, Mr Trump said Democrats “unfortunately have the votes” to impeach him, but predicted he would win in a trial in the Republican-led Senate.

Most Republicans are standing squarely behind Mr Trump, though two Republican senators have spoken out against the president.

His remarks came a day after Mr Trump publicly called on Ukraine and China to investigate Mr Biden and his son, Hunter.

There has been no evidence of wrongdoing by Hunter Biden, who served on the board of the Ukrainian gas company Burisma until earlier this year.

On the same day, text messages released by congressional Democrats showed how US officials worked to prod the Ukrainian president into opening a public inquiry into Mr Biden.

Could there be a second whistleblower?

As the fast-moving investigation into Mr Trump escalates, there are reports of a second intelligence official considering making a complaint against the president.

Michael Atkinson, the general inspector of the intelligence community, interviewed this official to corroborate the original whistleblower’s allegations, the paper reported.

Given the original whistleblower, reported to be a CIA official, did not directly witness the call, the testimony of a second official could prove valuable to the Democrats’ inquiry.