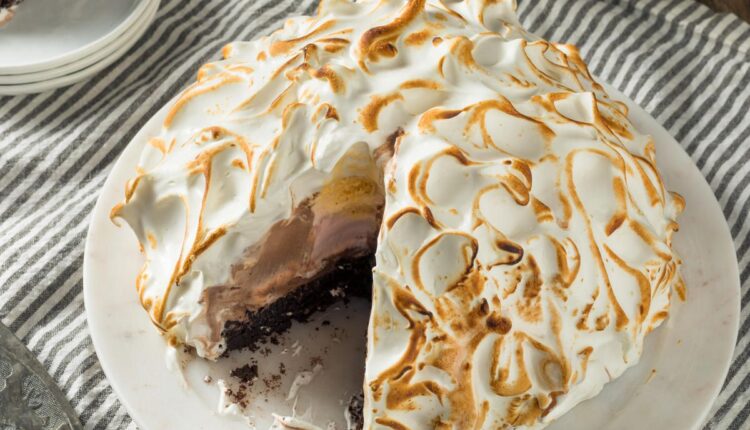 A delectable and popular French dessert made with ice cream on a layer of cake and covered with meringue before baking is known by various names in Western Europe. It is called omelette surprise, omelette norvegienne or a la norvegienne, and sometimes glace au four. In America, it is called baked Alaska. The French version, however, is generally richer and more elaborate creation than the American dessert.

It may be in oval, round, or square form, made with any kind of ice cream, and the meringue covering may be simply garnished with sugar or with more elaborate decorations such as crystallized violets. Sometimes, the cake layer is sprinkled with a liqueur and spread with pureed fruit.

There are several stories concerning the invention of this lovely dessert. Larousse Gastronomique states that it ”was launched into popularity about 1895, at the Hotel de Paris in Monte Carlo, by Jean Giroix, who was then in charge of the kitchen there.” The book also points out that the creation was possibly the invention of a master cook of a Chinese Mission visiting Paris in the 1800s. Another possible creator, they relate, was an American-born physicist who worked in England.

There is no doubt about the appeal of the ice cream treasure, a glorious presentation whether served in a French restaurant or at a home table. This is one version. 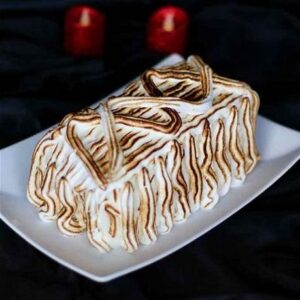 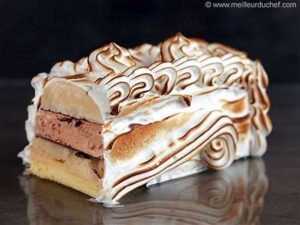 Before starting the preparation of the dessert, decide if it is to be in an oval, square, or round form. Also, be sure that the ice cream is frozen as hard as possible and molded in the same form as the cake. The cake should be cut to extend 1 inch beyond the ice cream which will be placed over it. 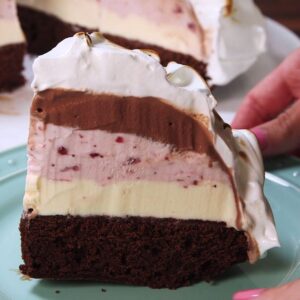 To prepare, place a piece of brown paper on a cookie sheet. Arrange the cake on it, spread with the puree, and sprinkle with the liqueur. Then put the ice cream on top. Spread all the surfaces with a meringue made by beating together the egg whites, granulated sugar. and salt until stiff. Sprinkle the top with Confectioners’ sugar and put in a preheated hot oven for about 5 minutes or until delicately browned.

Slip onto a chilled platter and serve at once.  Cut into slices.