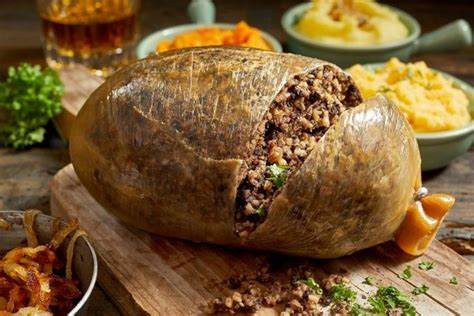 The Scottish national dish, haggis, was rated by the noted poet Robert Burns as ”the great chieftain o” the puddin’ race.” Made by stuffing a sheep’s stomach with a variety of ingredients including the animal’s innards, the dish is much beloved in its homeland but generally derided elsewhere. It is standard fare at all Scottish national holiday gatherings held around the world wherever Scots live. Anyone who has not tasted haggis, but has heard it described, approaches the dish timidly. The surprise at the goodness of the fare is a great delight to Scots. The recipe for the dish is as follows: 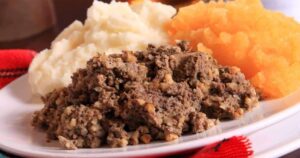 Clean the paunch or stomach bag thoroughly; wash first in cold water, then plunge into boiling water and scrape: then leave to soak overnight in cold salted water. In the morning put it aside with the rough side turned out. Wash the small bag and pluck them, and put them on to boil in cold water to cover, letting the wind-pipe hang out over the pot to let any impurities pass out freely.

Boil for an hour and a half, then remove and cut away the pipes and any superfluities of gristle. Mince the Heart and Lights, and grate half the liver. (The rest is not required.) Mince the onions and suet, and toast the oatmeal very slowly before the fire or in a warm oven. Mix all these ingredients together and season with salt. plenty of black pepper, and add a pinch of cayenne.

Fill the bag rather than half full-say five-eights. It needs plenty of room to swell. Press out the air and sew the bag securely. Put it into a pot of fast boiling water, and prick it with a large needle when it first swells, to prevent bursting. Boil slowly but steadily for three hours, without the lid, adding more boiling water as required. Serve very hot without garnish. Haggis is usually served with ”neeps” and ”nips”-mashed turnips and nips of whisky and, of course, potatoes. 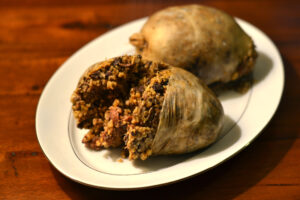