Display of Intellectual Dishonesty By Franklin Cudjoe of IMANI

As a young academic, I get worried, when due to parochial and personal interests, people who have the trust and confidence of the general public deliberately engage in sweeping statements and conscious twisting of facts to score cheap points. I call this intellectual dishonesty and unconscious intelligence.

On Thursday, 30th July 2020, at exactly 7:08am, Franklin Cudjoe of IMANI tweeted a thread: “I can’t believe this government has borrowed more than 100bn cedis within three and half years, trumping all other governments since independence. Yet on Joy News TV yesterday it was reported “over 45% of Ghana’s population extremely poor [thread 1] from multidimensional poverty authored by the Ghana Statistical Service. Could be 60% in hardcore poverty regions, I think. 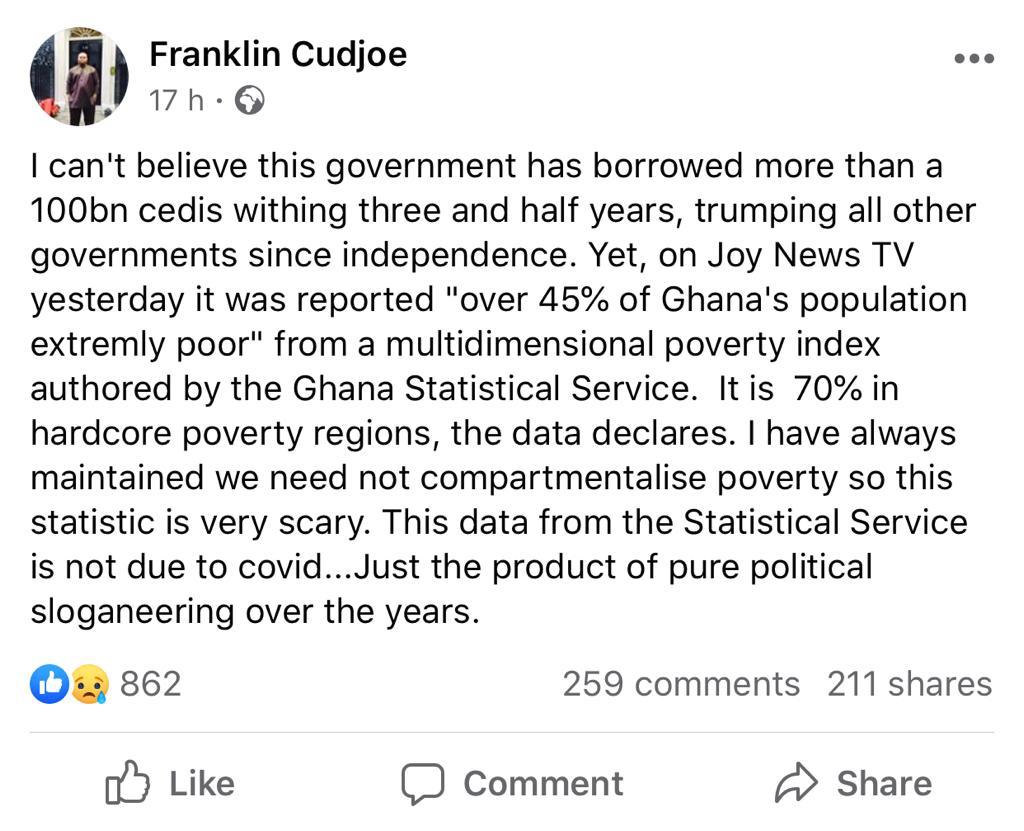 Though it was a third of the population [thread 2] I have always maintained we need not compartmentalise poverty, so this statistic is scary. This statistic from the Statistical Service is not due to COVID…just the product of pure political sloganeering over the years [thread 3]”

I am not an economist. I am a computer scientist and a cybersecurity professional. I only did two semesters of elements of economics during my BSc degree at KNUST. However, I was scandalised and completely dumbfounded reading the above tweets from such a person in our society. Unfortunately, many that read his tweets judged it to be true.

Franklin talked about the Multidimensional Poverty Index (MPI). The MPI 2020 which was conducted by the Ghana Statistical Service (GSS), was released in June 2020. Although the MPI was conducted in 2020, the data for the computation does not include anything that took place in 2018, 2019 or 2020. Even the inclusion of 2017 has implications. I will explain.

What is the MPI then? In a nutshell, MPI considers the many overlapping deprivations that poor people experience. Such people often lack education, healthcare, ramshackle housing, unsafe water and a host of other indicators.

MPIs can be equivalently computed as the weighted sum of censored headcount ratios- which shows the percentage of people who are identified as poor and also deprived as an indicator. 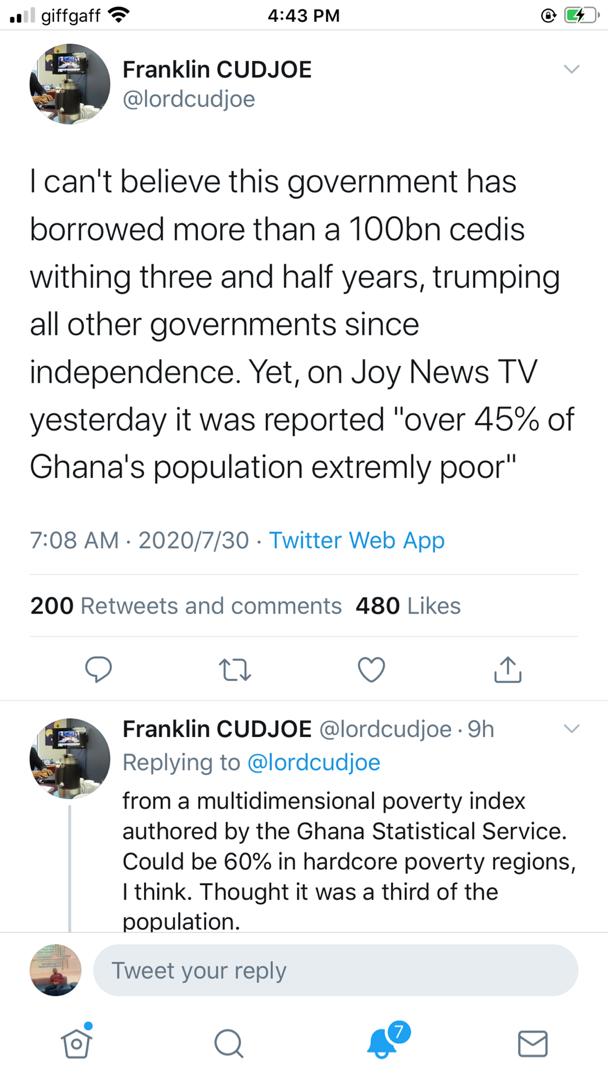 I took time to read and understand the methodology for the 2020 MPI for Ghana. The MPI used data from the seventh round of the Ghana Living Standards Survey (GLSS) conducted between 2016/2017 survey periods. The report also employed a strict harmonised dataset from the Ghana Multiple Indicator Cluster Surveys (MICS) conducted in 2011 and 2018 for trend analyses. The Alkire-Foster methodology was used to measure the MPI for the country.

It is important to note that the MPI was calculated on the GLSS data only.

Clearly, from the period of data collection for the GLSS, the baseline data on which the MPI was computed, what took place in 2017, 2018, 2019 and 2020 could technically account for 2017 MPI released in 2020. It is deception on the part of any person who understands basic research methodology to infer what has transpired in 2018 2019 and 2020 to an MPI for 2017, whose baseline data does not include these years. It is even more scandalous coming from a President of a Think Tank, IMANI that assumed to be knowledgeable in all aspects of governance and administration, including IT, Health, Education, Economy, Manufacturing, Agriculture, Mining, and the likes. 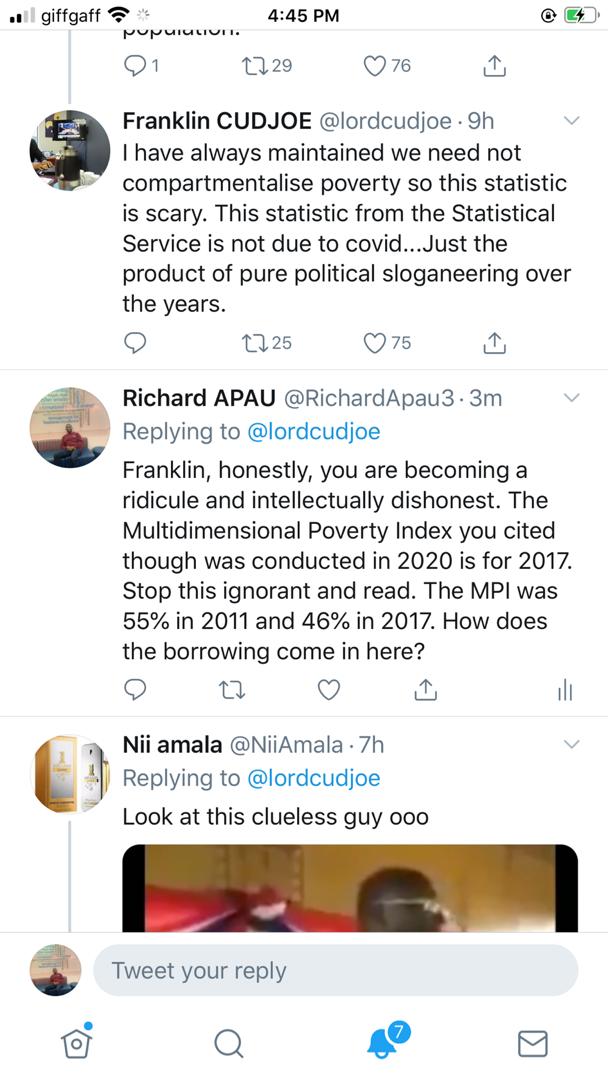 My interest is not on his claim of this government borrowing 100bn. That is a claim that has to be disputed by the government and its communicators. But I am concerned about his sweeping statement on such a public space without recourse to research for the accurate information. Common-sense would tell us that, if a government has borrowed 100bn cedis from 2018 to 2020, it cannot account for a reduction in poverty in 2016. If there is someone to blame at all, then it should be the one that borrowed from 2011 to 2016. This is a simple common fact based on data and science.

Again, if Mr Franklin Cudjoe had taken his time to read the report, he would have sung praises on the leader who ruled Ghana from 2011 to 2016, because the person significantly reduced the level of poverty in Ghana as per the MPI 2017 released in June 2020.

The picture is not gloomy as it sought to portray in his sweeping statement and casting of sensational insinuations and innuendos.

The results show that 45.6 per cent of Ghana’s population are multidimensionally poor. The indicators that contribute most to multidimensional poverty in Ghana are lack of health insurance coverage, undernutrition, school lag and households with members without any educational qualification. The intensity of poverty is 51.7 percent, meaning that poor people experience, on average, more than half of the weighted deprivations. The MPI, which is the product of the incidence and intensity of poverty, is 0.236.

As intellectuals, we have a responsibility not to mislead the public on important national issues. Mr Franklin Cudjoe has a huge following both on social media and the mainstream media. People take what he says hook line and sinker.

A lot of time he has made sweeping and unsubstantiated allegations that are false. He has often dabbled in falsehoods calculated to deliberately sway the public’s attention to what he considers to be the right thing.

I had earlier wanted to write on his claim on KelniGvG and the technology being employed by the EC for the voter registration. In each of these instances, he deliberately twisted facts or unknowingly communicated many technological untruths.

I believe this is not good for Ghana’s democratic dispensations. Think tanks and CSOs should instead be the medium for spreading true and accurate information, not an avenue for spreading propaganda and unsubstantiated allegations.

Henceforth, we have a duty to safeguard the public from consuming untruths and deliberate misapplication of public influence to score personal, parochial interest.