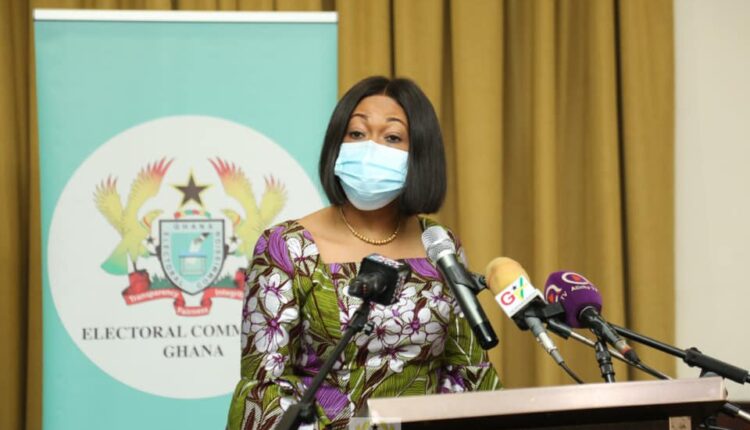 Chairperson of the Electoral Commission (EC), Mrs Jean Mensa, is saddened by the violence and deaths that marked the 2020 elections but insisted that security was not her job.

Mrs Mensa indicated that the Commission’s duties were election management which does not extend to protecting lives.

The December 7 election was marked by over 60 reported incidents of violence, including the firing of guns at various polling stations across the country.

The police said they recorded at least five deaths and several injuries within the period of the elections. Techiman South recording the highest casualties—three.

What did Mrs Mensa say?

The EC boss speaking at an Inter-Party Advisory Committee (IPAC) review workshop on the 2020 polls condemned the excess recorded during her tenure.

“An exceedingly disturbing challenge is the violence which led to the death of citizens of our country. And we say, never again! Never again should we go to an election and have anybody lose their lives. Here also, there is a tendency for fingers to be pointed at the EC when security is not the core mandate of the EC.

“I have read the constitution, and security is not part of our core mandate. I use this occasion to clarify that the EC is not responsible for election security, although the entire election and its success rest on the shoulders of the Commission. Our mandate as entrenched in the Constitution does not include security,” she stressed.

The EC has scored high marks for itself on the organisation of the elections, but the violence and deaths remain a dent in their performance.

The violence compelled six members of the Majority in Parliament to table a private members’ motion to seek a full-scale probe.

In their motion, they listed seven persons who died concerning election violence.

The Majority in Parliament had earlier demanded the immediate dismissal of the Inspector General of Police, James Oppong-Boanuh, for failing to ensure the safety of Ghanaians.

The Coalition of Domestic Election Observers (CODEO) requested the Inspector General of Police conduct a probe into the deaths.

Recently, the Head of the UN Office for West Africa and the Sahel, Dr Mohammed Ibn Chambas, said the development had affected Ghana’s image globally.

“I hear that, indeed, in some of our neighbouring countries, we did witness crisis prior to the election, during the election and post-election including, for instance, Guinea and other neighbouring countries like Côte d’Ivoire where we had a large number of election violence. It is in that regard that we should also be concerned that perhaps we lost our bragging rights because I used to be able to brag about the fact that despite tensions and differences during elections in Ghana, there are never any deaths. Still, I think this time our image has been dented.”

He spoke during a post-election stakeholder review workshop on the 2020 Presidential and Parliamentary elections organized by CODEO.