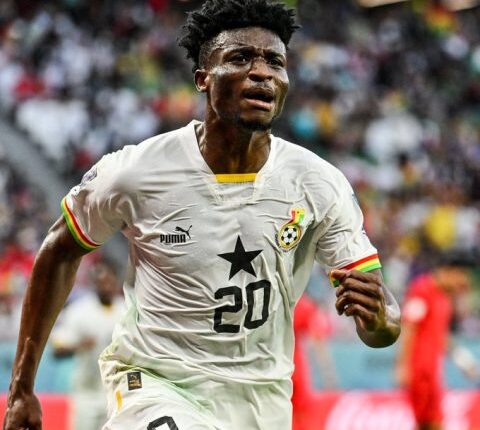 German side Borussia Dortmund have contacted the representatives of Ghana midfielder Mohammed Kudus ahead of the winter transfer window.

The Bundesliga giants have opened negotiations with the camp of the payer as they prepare an offer for the World Cup star.

Dortmund are set to break the bank and pay around 20 million Euros for the Ajax attacking midfielder.

The Black Stars midfielder has been on the radar of several clubs including Liverpool, who sent scouts to Qatar to watch the player.

Kudus was Ghana’s brightest spot at the World Cup, contributing three goals for the Black Stars as the West African nation exited the tournament at the group stage. He scored two goals and provided an assist.

Barcelona have also been tracking the 22-year-old for some time now while Everton came close to signing the player in the summer transfer window.

With Jude Bellingham in high demand, the German outfit sees the Ghanaian as their next marquee signing.