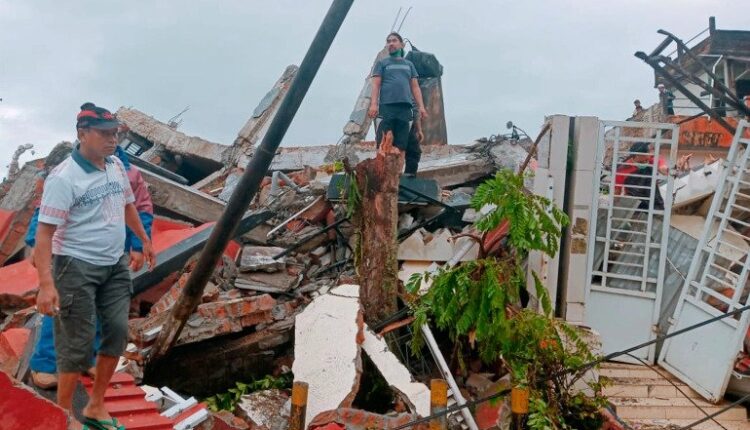 At least 34 people have been killed and more than 600 injured after a magnitude 6.2 earthquake struck and toppled buildings in Indonesia’s Sulawesi island in the early hours of Friday, according to authorities.

The epicentre of the quake was six kilometres (3.73 miles) northeast of the city of Majene, at a depth of 10 kilometres (6.2 miles).

Al Jazeera’s Jessica Washington, reporting from Jakarta, said the situation was still developing in the area.

“Authorities in west Sulawesi are still working to restore communications. Electricity is down. Once communications are restored we should have a clearer picture of the exact extent of the damage,” she said.

President Joko Widodo offered condolences to the victims in a video statement, urging people to stay calm and authorities to step up search efforts.

At least 15,000 people have been displaced following the quake.

North of Majene, more than a dozen patients and staff are trapped beneath the rubble of a hospital that was flattened by the quake.

“The hospital is flattened – it collapsed,” said Arianto from the rescue agency in Mamuju city, who goes by one name.

“There are patients and hospital employees trapped under the rubble and we’re now trying to reach them,” he told AFP news agency, without giving a specific figure.

The disaster mitigation agency said a hotel and the office of the West Sulawesi governor were also severely damaged, and electricity supplies were also down.

Some roads and bridges were also damaged slowing down the rescue operation.

Several thousand panicked residents fled their homes to seek safety after the quake, which did not trigger a tsunami warning but was felt strongly for about seven seconds, the statement said.

An expert from the country’s meteorology, climatology, and geophysical agency, BMKG, warned that aftershocks could trigger a possible tsunami.

In an online press conference, BMKG Prof Dwikorita Karnawati has advised residents in the area to take precaution and move to higher ground.

Straddling the so-called Pacific ‘ring of fire’, Indonesia, an archipelago of high tectonic activity, is regularly hit by earthquakes.

In 2018, a devastating 6.2 magnitude quake and tsunami struck the city of Palu, further north in Sulawesi, killing thousands of people.

In December 2004, a 9.1 magnitude quake off the north of Indonesia’s Sumatra island triggered a tsunami that swept over coastal areas of Indonesia, Sri Lanka, India, Thailand and nine other countries, killing more than 230,000 people.