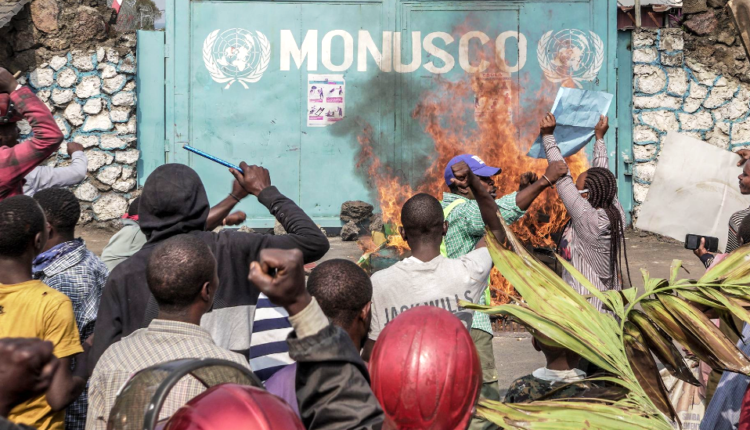 Police in the eastern part of Democratic Republic of Congo have clashed with demonstrators on a third day of violent anti-UN protests.

At least 17 people including three members of the UN peacekeeping force have been killed, officials say.

Protests erupted in the town of Goma as people accused the UN of failing to contain violence by armed groups.

The UN warns attacks on its mission, on the ground for more than two decades, may constitute a war crime.

Attacks were made on two of its bases, in Goma and in Butembo, where two Indian peacekeepers and a third member of the UN force were killed.

More than 50 people have been injured since the clashes began on Monday. On Wednesday, protesters again targeted UN bases in the region.

A spokesman said UN Secretary General António Guterres had called on the Congolese authorities to investigate the incidents.

The UN blamed the violence and looting of its property on criminals pretending to be protesters.

It said they had seized weapons from local police and opened fire.

“Mobs are throwing stones and petrol bombs, breaking into bases, looting and vandalising, and setting facilities on fire,” said Farhan Haq, deputy spokesperson for Mr Guterres, in a statement.

“The situation is very volatile and reinforcements are being mobilised. Our quick reaction forces are on high alert and have been advised to exercise maximum restraint, using tear gas to disperse protestors and only firing warning shots when UN personnel or property are under attack.”

Local police have also accused some members of armed groups of infiltrating the protests to incite hatred of the peacekeepers, whose force is officially known as Monusco.

The DR Congo’s army is battling both the M23 armed movement and the Allied Democratic Force (ADF), a group affiliated with so-called Islamic State, and many other militias.

Anger is widespread over the UN’s failure to halt violence by armed groups operating in the mineral-rich east.

“They are tear-gassing us because we came to say that Monusco does not help us,” protester Anselme Musimbwa told the Reuters news agency in Goma on Tuesday.

“They’ve been in Congo for 22 years and nothing works.”

Fellow protester Jack Sinzahera said: “We have our own police that will look after our security and property. We don’t want anything to do with Monusco.”

UN peacekeepers have often been targeted by rebels in DR Congo and have often faced accusations of failing to protect civilians – criticism the UN has always dismissed.

But the latest protests pose a serious complication for the UN’s largest and most heavily funded peacekeeping mission.