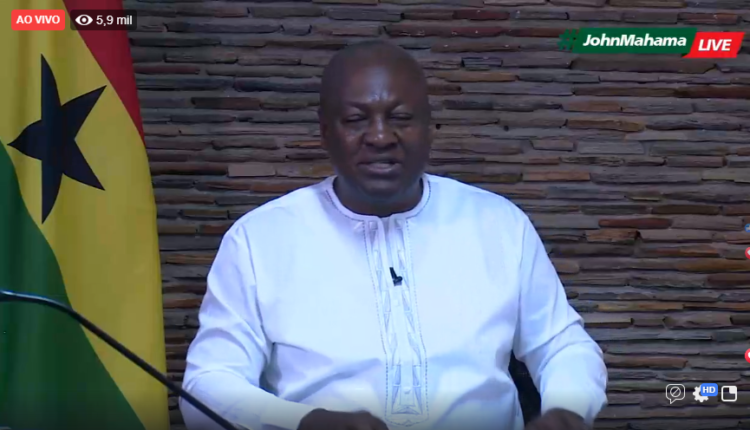 Setting: There were no/limited use of party colors. The Ghanaian flag gave it a nationalistic feel. The rest of the background was pretty clear with no other designs or decorations. The bare settings allowed viewers to focus on the individual with no distractions. The green hashtag wasn’t visible enough. In future other related digital information could be presented briefly on-screen maybe as a superscript.

Grade: B+ for setting.

Style/Delivery: Mahama was well composed and appeared confident. His voice sounded tired and strained at times but he was overall very clear and smooth. There were no breaks and he seemed very much at ease. His body movements were on point except for situations when he used the one arm on the table and the other sideways like the newscasters sometimes do. Didn’t come off too well on him. He was best when he clasped his hands together. He was serious, forthright and well-composed.

Grade: A- for delivery

Structure/Format: This is where I had major concerns. Yes, the basic social media features of engagement and immediacy was there but I feel more could be done in terms of interaction and immersion. There was a feeling something was lacking. It appeared to me that the methodology for the show was not well thought through enough. If there’s a decision to go with a studio audience then it should be expansive and broadened out enough, if not they could stick with a purely online audience. The sparse nature of the in house audience felt lacking and didn’t give a very robust feel.

Content: We all know the major pointers by now: cancellation of the CST tax, review of free SHS, creation of staple crop processing factories, elimination of licensure exams for teachers, reduction in the number of ministers, etc.

Verdict: I’ll leave the policy guys to evaluate this or take a stab. Also, Ghanaians are the best judges.

You’ve got to give it to the guys behind the scenes. It went as smooth as it could go. More work needed in the pre-event dissemination and in the area of making it more engaging and immersive.

Amidu’s latest Epistle: The arrogance and impunity of power – the…