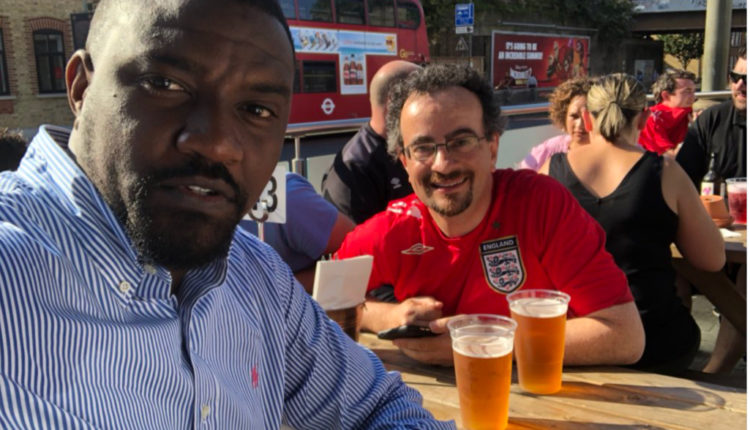 Former United Kingdom (UK) High Commissioner to Ghana, Jon Benjamin is yet to pull the ‘troll brakes’ on actor John Dumelo several months after the latter’s V8 vehicle was confiscated by government.

According to a narration by a member of the team that seized the vehicle, Abronye DC, the popular actor was in the process of re-spraying the vehicle for personal use when a ‘good samaritan’ tipped off the team.

He said when the team got to the spraying shop, parts of the vehicles had been imported from Dubai for the re-modeling of the vehicle which John Dumelo had earlier claimed was given to him by former first lady, Lordina Mahama.

Months after the encounter and with the actor taking on additional responsibilities as a politician, Jon Benjamin will still not let go of the trolls which got John Dumelo trending for several weeks on twitter.

The diplomat said in a post on social media, “ayekooo paaaa for your nomination, the first step on a long political journey to becoming Ghana’s President – sometime around the year 20V8.”

The former UK High Commissioner to Ghana’s comment comes on the back of news that John Dumelo had won his party’s primaries making him the NDC’s Parliamentary Candidate for the 2020 presidential and parliamentary election. 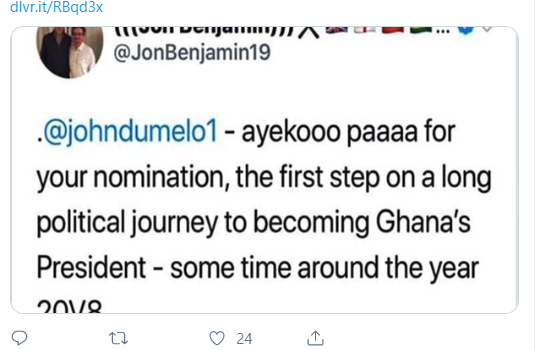 Mr. Dumelo won the NDC parliamentary primaries for the Ayawaso West Wuogon constituency seat with the largest margin on Saturday.