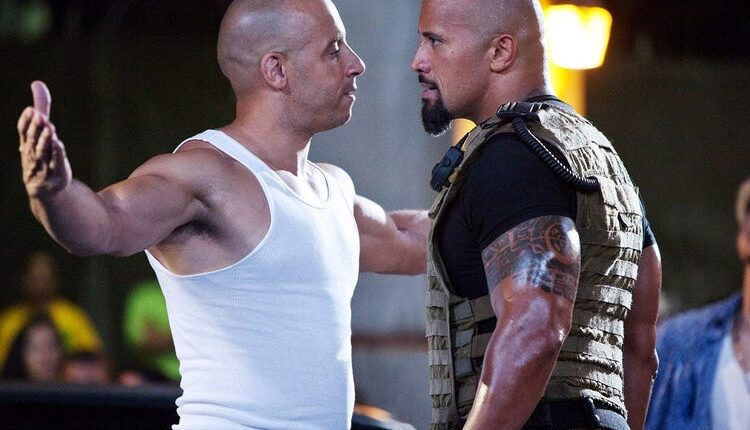 Dwayne Johnson is firing back at Vin Diesel’s claims he and his costar feuded over a “tough love” approach on the set of the Fast & Furious films.

In conversation with Vanity Fair for the magazine’s November cover, Johnson, 49, reacted to comments Diesel, 54, made over this summer about their relationship while working on the hit action franchise. In June, Diesel told Men’s Health of production, “I could give a lot of tough love. Not Felliniesque, but I would do anything I’d have to do in order to get performances in anything I’m producing.”

When reminded of his costar’s comments during his interview with the magazine, Johnson “bellow[ed] with laughter.”

“One part of me feels like there’s no way I would dignify any of that bull—- with an answer,” he said. “I’ve been around the block a lot of times. Unlike [Diesel], I did not come from the world of theater. And, you know, I came up differently and was raised differently.”

Johnson continued, “And I came from a completely different culture and environment. And I go into every project giving it my all. And if I feel that there’s some things that need to be squared away and handled and taken care of, then I do it. And it’s just that simple. So when I read that, just like everybody else, I laughed. I laughed hard. We all laughed. And somewhere I’m sure Fellini is laughing too.”

A rep for Diesel did not immediately respond to PEOPLE’s request for comment.

Johnson, who starred in his first Fast & Furious film in 2011 and most recently appeared in 2019’s Hobbs & Shaw, confirmed to Vanity Fair that he only agreed to appear in 2017’s The Fate of the Furious if he didn’t have to share any scenes with Diesel.

“I wanted to forgo drama,” he said. “I thought that that was the best thing to do. For everybody.”

He also opened up about his 2016 Instagram post in which he called out his male costars in Fast 8. The post is now deleted, but read, in part, “My female costars are always amazing and I love ’em. My male costars however are a different story. Some conduct themselves as stand up men and true professionals, while others don’t,” PEOPLE reported at the time.

Johnson did not call out anyone by name, but opined at the time, “The ones that don’t are too chicken s— to do anything about it anyway. Candy asses.

“When you watch this movie next April and it seems like I’m not acting in some of these scenes and my blood is legit boiling — you’re right,” he added.

Reflecting on what went down on set after he posted the message, Johnson told Vanity Fair “[it was] as if every single crew member found their way to me and either quietly thanked me or sent me a note. The actor clarified that while “nothing specific happened” that day that made him speak out, also admitting that “I shouldn’t have shared that” because of his NDA, he insisted, “I meant what I said.”

Following his post, Johnson had a meeting with Diesel in his trailer.

“I wouldn’t call it a peaceful meeting. I would call it a meeting of clarity,” he told the outlet. “He and I had a good chat in my trailer, and it was out of that chat that it really became just crystal clear that we are two separate ends of the spectrum. And agreed to leave it there.”

The Jungle Cruise star, who added that he and Diesel are “philosophically two different people,” also shot down some of his costar’s claims about their relationship, including his 2017 comment to USA Today, in which he told the outlet, “I protected Dwayne more than he’ll ever know…but he appreciates it. He knows he only has one big brother in the film world, and that’s me.”

Clapping back, Johnson told Vanity Fair, “I have one big brother and it’s my half brother. And that’s it.”