As many as eight Ghanaians out of 10 have abandoned Mobile Money (MoMo) transactions after the implementation of the 1.5% Electronic Transfer Levy (E-Levy), a survey by think tank IMANI Africa has revealed.

Consequently, IMANI Africa has raised fears about the government achieving its revenue target of GHC4.5 billion due to the drastic decline.

The research sought to establish the impact of the 1.5% Tax on Electronic Transactions on Ghanaians and coping strategies adopted since its passage in May this year.

Out of a pool of 1,677 sampled between the period of 31 May to 17 June, the survey showed an 83 percent reduction in volume.

According to the survey, the majority of Ghanaians felt compelled to do so in order to adjust to the limits introduced by the said levy as far as their livelihoods were concerned.

Further analysis of how many people were in support showed that 80.3 per cent were kicked against the 1.5% tax on electronic transactions. 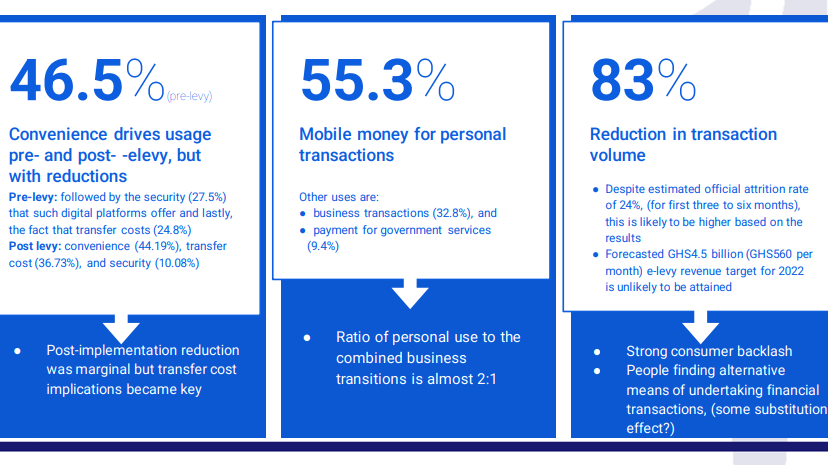 Asked why they are not in support of the E-levy, 32.2% were convinced any money collected would go into a leaking basket.

They further said there would be little accountability for the use of the existing monies collected anyway, and thus their unwillingness to support the agenda.

Another 32% urged the government to rather cut down on wasteful expenditure — cruising in V8s, allowances, conferences, and travel.

Some 23.5% mentioned that Ghanaians were already over-taxed, with many indirect taxes, and thus their reason for not supporting the E-Levy.

However, 5.8 per cent indicated that they are somehow in support, and 1.1 per cent said they are still undecided on what gains the E-levy is expected to generate.

Per the survey, nearly 100% are registered on mobile money, with MTN topping the chart. 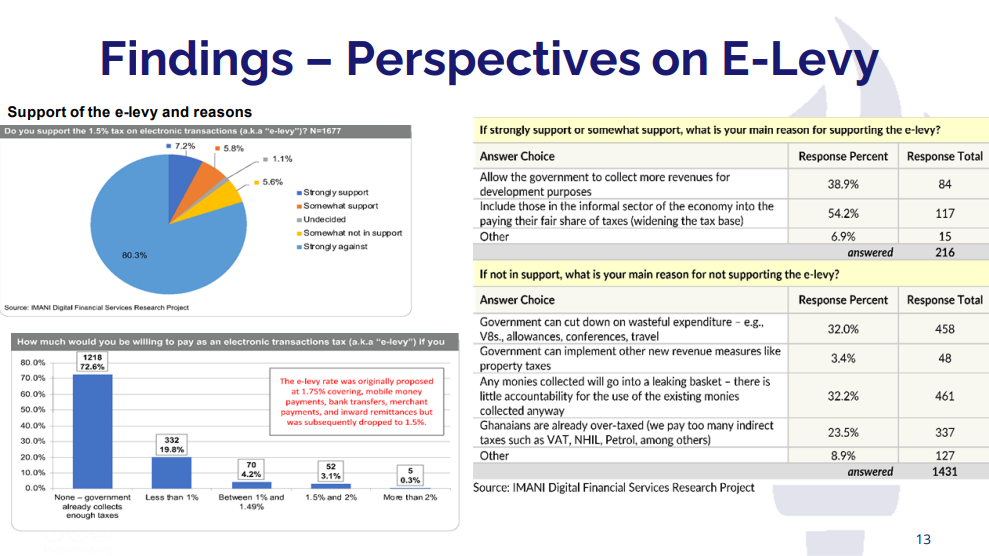 The survey was conducted by IMANI Centre for Policy and Education in collaboration with Deutsche Gesellschaft für Internationale Zusammenarbeit (GIZ).

The levy had divided Parliament, with the majority pushing for approval while the Minority kicked against it.

The Chamber turned chaotic as MPs pushed, shoved, and punched each other during the heated exchanges that many observers have since condemned.

But Parliament approved the policy without the participation of NDC MPs who had staged a walkout during the E-levy debate on Tuesday, March 29, 2022.