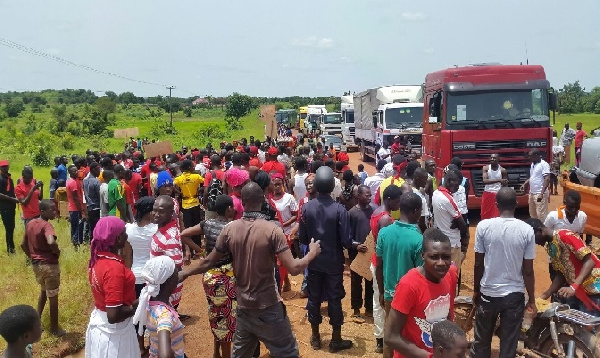 Hundreds of Drivers at Asamankese, the Municipal capital of West Akyem in the Eastern region on Tuesday held a spontaneous protest over the deplorable roads in the area.

Leadership of the Taxi Drivers had originally scheduled to meet the Municipal Chief Executive, Seth Oduro-Boadu ahead of a planned demonstration at a later date, but the angry taxi drivers who operate in Asamankese township and its environs parked their cars and trooped to the Municipal Assembly amidst chanting of war songs to express their sentiment over the poor state of roads in the area.

The protest led to a blockade of a major road in front of the Municipal Assembly and the District Police Station causing gridlock for close to an hour.

The police in attempt to control the chaotic situation fired warning shots to disperse the protestors from the main road infuriating the drivers but the situation was brought under control.

“This is not a planned demonstration. Our leaders told us the MCE wanted to meet us this morning so yesterday there was announcement so we stopped everybody from working and we have all marched here. The most pressing road that needs urgent attention is the hospital road, that road is so bad that even pregnant women in our car being rushed there give birth in he cars because u can’t move faster.

“All your car will be soaked with blood you can’t even work again. People in critical condition die on that road because instead of using 2 minutes to rush to the hospital u can spend 20 minutes on that stretch,” a driver lamented.

Another driver told the media that “Akufo Addo should release funds for the construction of the roads .We have given them just one month. The warning shots by the commander were laughable because we don’t fear bullet but we came in peace today the next time we hit the street and he tries that thing we will let them know how radical we are”.

He added “we had wanted to demonstrate because we have met the MCE twice about this problem but nothing has been done about the roads, however, the Police Commander says because he is new he will like us to meet the MCE, when we came the MCE said he is not a controller. So we want the commander to grant our request for the demonstration else we will meet them boot for boot.”

Addressing the media the MCE Seth Oduro-Boadu concurred with the angry drivers about the poor nature of roads in the town but hastened to add that Asamankese town roads have been awarded for Construction.

“It is regrettable how they trooped here to demonstrate had the police not acted professionally it would have turned into a confrontation. It is a fact that Asamankese town roads are in deplorable condition but the roads have been awarded to a contractor which the contractors are working on, they have completed the first face and raised certificates for payment so if they are paid they will return to sites.”