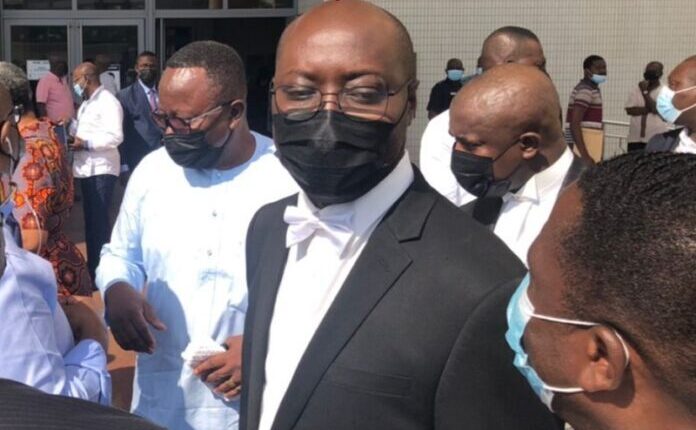 A former Deputy Finance Minister, Cassiel Ato Forson, has pleaded not guilty to causing a €2.3 million loss to the state in an ambulance deal.

Two other accused persons, Sylvestre Anemana, a former Chief Director at the Ministry of Health and Richard Jakpa, a businessman, also pleaded not guilty.

The trio have been dragged to an Accra High Court over a deal to purchase 200 ambulances for the country between 2014 and 2016.

All three have since been granted bail after the court took their pleas.

The prosecution did not object to the bail application. Attorney General Godfred Yeboah Dame was in court with his two deputies – Alfred Tuah-Yeboah and Diana Asonaba Dapaah.

The prosecution, however, urged the court to admit Mr Forson to a self recognisance bail because he is a public officer while the two others, who are businessmen, be admitted bailing sums that will compel them to stand trial.

After listening to the parties, the court presided over by Justice Afia Serwaa Asare-Botwe admitted the accused persons to bail.

Mr Forson was granted self recognisance bail in the sum of GH¢3 million.

The second accused person was granted bail of GH¢1 million with three sureties, with one being a public servant not below the rank of a director.

The third accused was granted bail of GH¢5 million with three sureties, one of the sureties the court said should be justified with documents of landed property.

All accused persons have been ordered to deposit their passports to the court’s registrar by 2 pm tomorrow.

The prosecution has also been directed to file and serve accused persons and their lawyers with disclosures.

The facts of the case as presented in court were that in 2009, the President of Ghana indicated in his message on the state of the nation to Parliament that new ambulances would be procured to expand the existing fleet to enable many districts to be covered by the National Ambulance Service.

Following this address, the Ministry of Health initiated an action to acquire more ambulances.

Using his company, Jakpa at Business, the third accused presented a proposal and a term loan to the Ministry of Health, which claimed to have arranged from Stanbic Bank to finance the supply of 200 ambulances to the government.

On 22 December 2011, Cabinet endorsed an Executive Approval that had been granted for a joint memorandum submitted by the Minister for Health and the Deputy Minister for Finance and Economic Planning for the purchase
of 200 ambulances for the National Ambulance Service (NAS), out of a medium-term loan facility of €15,800,000.00 to be paid out of a credit arrangement between Stanbic Bank Ghana Limited and the government of Ghana through the Ministry of Finance.

By a joint memorandum dated 30 April 2012, the Minister for Finance, Dr Kwabena Duffuor, and the Minister for Health, Alban S. K. Bagbin, applied for parliamentary approval to supply the 200 ambulances.

This memorandum to Parliament did not refer to any role to be played by either Big Sea General Trading Limited (Big Sea), Dubai, UAE or the agents for Big Sea, Jakpa at Business Limited, in the transaction.

On 1 November 2012, Parliament granted approval for the financing agreement between the government of Ghana and Stanbic Bank Ghana Limited for the procurement of ambulances.

By a letter dated 19 November 2012, the second accused person, who was then the Chief Director at the Ministry of Health, requested approval from the Public Procurement Authority (PPA) to engage Big Sea through a process of single-sourcing for the supply of 200 ambulances.

The letter falsely indicated that the reason for the single-sourcing was because Big Sea had arranged for funding for the project.

By an agreement dated 19 December 2012, the government of Ghana, represented by the Ministry of Health, formally contracted with Big Sea General Trading LLC, based in Dubai, for the supply of 200 Mercedes Benz
ambulances.

The contract was to become effective upon the signature of both parties of the agreement and when all governmental and other approvals had been obtained.

As per the agreement, the terms of delivery were that the first consignment of 25 vehicles should be delivered within 120 days of execution of the agreement.

The outstanding 175 vehicles were to be delivered in batches of 25 every 30 days after that.

By the terms of the agreement, advance payment was prohibited. Also, payment for the purchase price of €15,800,000.00 was to be by “raising an irrevocable and transferable Letter of Credit” from the government of Ghana’s
bankers for the benefit of the supplier.

Upon delivery of every 50 ambulances, 25% of the purchase price was to be paid through confirmed letters of credit (LC) on the sight of goods opened in favour of the supplier upon submission of a number of documents specified in the agreement.

On 7 August 2014, the first accused person, Cassiel A. Forson, is said to have written to the Bank of Ghana urgently requesting to establish the Letters of Credit for the supply of 50 ambulances amounting to EUR3, 950,000 representing 25% of the contract sum, while arrangements were made to sign the loan agreement in favour of Big Sea.

On 12 August 2014, the first accused person again wrote to the Controller and Accountant-General, authorising the release of the sum of GHC806.688.75 to the Minister for Health to enable him to pay the bank charges covering the establishment of Letters of Credit (LCs) for the supply of 50 Mercedes Benz Ambulances and Related Services.

He further directed that the LCs should be charged to the budget of the Ministry of Health contrary to the Parliamentary approval on the funding for the supply of the ambulances.

“The Controller and Accountant-General, on the authority of the letters dated 7 and 12 August 2014 written by the first accused person, wrote to the Bank of Ghana on 14 August 2014, authorising it to establish an irrevocable
transferable Letters of Credit in the sum of €3,950,000 in favour of Big Sea.

“A consignment of 10 ambulances which was shipped from Dubai on 22 October 2014 arrived on 16 December 2014. A post-delivery inspection of the first batch of 10 ambulances revealed that same were without any medical
equipment in them.

“Other fundamental defects included defects on the body of the vehicles and the patient compartment of the ambulances,” as narrated by the prosecution.

The same was brought to the attention of Big Sea in a letter dated 11 February 2015 written by the second accused, Sylvester Anemana.

By a reply dated 19 February 2015, Big Sea acknowledged the defects with the vehicles but indicated that they proceeded to ship the vehicles when they received the LCs on 18 August 2014.

The company also stated that the second consignment of 10 vehicles with the same defects had been shipped 51 days before the date of the letter from the ministry.

The company promised to send their technicians to fix all issues relating to the defects and train Ghanaian staff before handing over the ambulances.

The third batch of 10 vehicles was shipped on 12 February 2015. The second batch had already arrived at the Tema Port by this time. All the 30 ambulances had the same fundamental defects stated above.

A further inspection by Silver Star Auto Limited at the request of the Ministry of Health disclosed that the vehicles were not originally built as ambulances and were therefore not fit to be converted for that purpose.

The third accused person as the local representative of Big Sea, knowing that Big Sea had not shipped ambulances, still arranged with his principal to supply the purported ambulances to charge a commission of 28.5% on the proceeds of the supply of these vehicles purported to be ambulances to the government of Ghana.

In a letter dated 20 January 2016, the then Minister for Health, Alex Segbefia, informed Big Sea that the vehicles did not meet ambulance specifications and were not fit for purpose.

The minister requested for an inspection of a well-equipped ambulance vehicle that meets specifications by 20 February 2016.

Following this, a team led by the CEO of the National Ambulance Service proceeded to Dubai and held an inspection on 11 February 2016.

After the visit to Dubai, Big Sea undertook to send a technical team to Ghana to rectify the defects but this was also not done.